The Gold cup is upon us and by 3.40 this afternoon it will all be over. In the meantime we have this puzzling question to answer. Kauto Star or Denman ? In fact if you've spent any time in Cheltenham over the last couple of days that is the only question that anyone's been asking. It's right up with with Ali vs Frazier, Prost vs Senna or Ferguson vs Wenger. 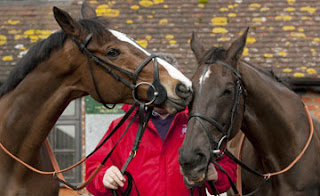 The facts are these: Kauto is a 10 year old French gelding while Denman is a 10 year old Irish gelding. Kauto has the experience having won the Gold Cup previously, while Denman has come a strong second in this very race last year. However Denman also won a Class one race at last years Festival, so the score is really one all..... For me, what swings it is yesterdays racing. A.P.McCoy was dismounted during two different races and the second time, he was in pain. His ride is Denman today, and purely for that reason, I think Kauto Star will win it. Jokeys might only be 2 foot tall, but they are tough little mother's in that yappy-dog yorkshire terrier sort of way, so perhaps he'll bounce back and take the bookies for the value of a small south african country. Regardless, huge sums of money are and will change hands on the subject today and it all adds up to a thrilling 10 minutes in the Horse Racing world. So I'm told.

While my tips haven't been the strongest this week, there have been a few winners of note, not least the last race yesterday where Ballabriggs gave us a lovely 8-1. Anyway, please do your best to ignore them, but these are todays and are the last tips you'll see from me until next year, because I only take any interest in horse racing during the week of the Cheltenham Gold Cup.

On a related note, it was WTC last night and with it being raceweek, that made for a busy night out. More on that elsewhere.

Further Starfleet education today leading up to what appears at the moment to be a quiet weekend. Mrs G's friend, S, lost her mum last week and the funeral is on Monday, so I've no doubt that we'll. drop in and see her with some moral support at some point. And we'll have the pleasure of Son's company for a couple of days as well. The big question there is whether we can prise his arse off of the sofa for any period of time - but that's boys for you.

And finally.... the tech stuff. Here's some items you might want to search for. Apple have a new patent for a thing called iGroups. Basically a method for building social groups based on location and with the ability for users without GPS-enabled devices to triangulate their position from other members of the group that do have a GPS-enabled device.

Smart phones are to become more like cashpoint machines with the advent of apps that allow you to take a photo of a cheque and use that to make a deposit. One wonders how many times you can deposit the same photo, but it's a nice idea. I'm using the PayPal app on iPhone to pay for stuff and give money to people and very nice it is too.

The NY Times reports that American companies are moving their research facilities and engineers to China as the country develops a high-tech economy that increasingly competes directly with the United States. All together now.... Buffoons!

The Playstation Move (that's a Wii-like controller for the playstation 3 to you and I) is apparently not as fast as Sony have been making out. They claimed it would have a response time of a bout 1 frame of 60Hz gameplay, but under tests by those that have got their hands on the odd looking lollypop of a gizmo, it's more like 133 milliseconds. I wonder if anyone actually cares ?

And I read this very disturbing article about McDonald's Happy Meals which says they don't decay!! ever!!, well maybe not ever, but they're pretty robust. Yet another reason never to go near them.
Cheltenham Gold Cup Playstation Racing tips