Day One of The Cheltenham Festival

Me and Mrs G had the foresight to have today off following a grand day out at the races, on the basis that we'd have hangovers to deal with which would be very irresponsible when there is work to be done. However, joy of joys, not a hangover in sight. I put this down to light eating and not mixing the drinks. Of course lots of fresh air and bracing breeze help too I'm sure.

10.30 saw us getting off the bus in Montpellier to meet up with a few friends in O'Neill's of all places. The pub was running a bus an hour before the races and an hour after with a pint of guiness for a fiver. But on such a beautiful sunny day, why would we want to do that ?. So Mrs G and I elected to wander the streets of Cheltenham soaking up the raceday atmosphere, and lots of it there was too.

Everything from bagpipes to harmonica's had found their way to the shopping area's with their owners ever hopeful that the passing public woould be impressed enough with the noise they were making to offer a donation (even if was just to shut them up). Many an Irishman with a copy of the racing post and a felt "pint of guineas" hat on, could also been seen staggering into/out of the many betting shops and pubs. As you get nearer the course through pittville park, more and more individuals of dubious ascent could be heard calling out "Tickets! Buying and selling! Anybody got tickets!" and then on the last stretch come the commercial giveaways. A betfair scarf here, a free 5 pound bet there, and so on ad infinitum. 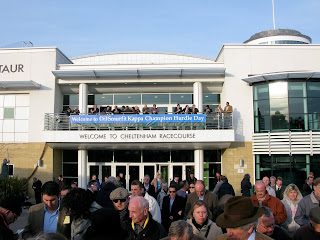 Finally the gates await us. Quick barscan of the tickets and we're in the Centaur building. 3 years ago this new conference center facility appeared behind the grandstand and on racedays it now houses the Coral betting desks, 3 or 4 bars and what feels like 5,000 punters.

Of course the grand stand is really the place to watch the races from and from here you can see the whole course. A stunning view across the fields to the edge of the Cotswolds and Cleeve Hill. This year 'Paddy Power' (a well known Irish bookmaker) had decided to pay a farmer on the hill to host a giant Hollywood style sign. Very funny and suitable for the week, but ONLY the week. This is Cheltenham after all. 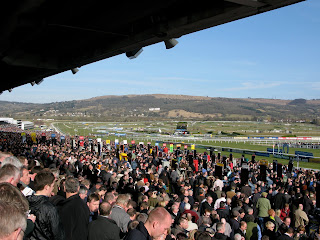 At the far of end of the grand stand sits the Guinness Village. This area is heavily sponsored by... you guessed it, Guinness.. Naturally, the main product on sale is the black stuff, and very enjoyable it is to. Behind the Village are the shops, a huge tented area that have all the racing paraphanelia you could ever want. Tweeds made to measure, paintings of famous horses, hunter wellies, jhodpurs, whips, saddles and bridles. 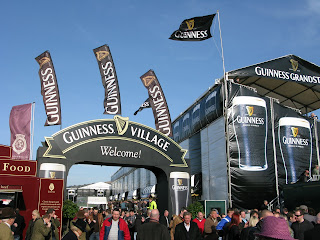 Also worth noting that the parade ring is another great vantage point to see what's going on. The horses and jockeys can all be seen here up close and personal as it were. The theory is this gives you the oppotunity to pick the winner after seeing them in the flesh. However, it seems to me to be more about the markets than the physicality of those involved. The bookies aren't in it to loose money, and invariably they don't. So a horse with short odds is most likely going to win meaning that the safe money would be an eachway bet on the second or third favourite. But what do I know?? 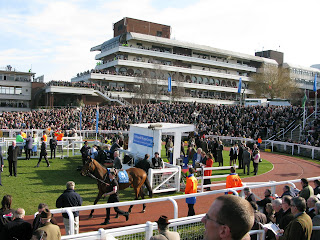 I didn't win anything in 2 out of 6 races, so you can draw your own conclusions but the betting paid for our day out, so all very worthwhile in the end. Beautiful weather, excellent atmosphere, and most certainly the sport of kings provided a grand day out for all concerned. 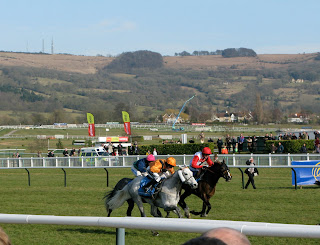 Post racing a long walk back to town, which by 6pm is completely heaving. Full of winners looking to spend and loosers crying into thier beer. Many entertaining sights to be seen, the shoeless and brainless in the cheap end of town with the suited and booted around Montpellier and the Queens hotel. Taxis and buses ferry the war wounded to and from the station and the crowds keep on coming. It's no wonder that the Cheltenham festival is considered the premier national hunt event.

Who could ask for anything more??
Cheltenham Gold Cup Racing tips