on March 31, 2010
Next steps in the technological evolution of the Interweb are going to be interesting one's I believe. You hear a lot of talk about Web 2.0, this 2.0 and that 2.0, but we're actually coming up to i3.0 in my opinion. To explain, a little history:

i 0.5
Back in the late 50's and early 60's the US government had some serious concerns that should "the Bomb" get dropped, all of their computer systems would fail - mostly due to connectivity between locations being disrupted. So the clever chaps at the Advanced Research Projects Agency, got together with the Department of Defence and came up with Packet switching networks. Packet switching is a way of breaking data into chunks and adding source and destination address details to each of these chunks before sending them off to their destination across what ever network is available. The genius being that if part of the network doesn't exist, the address information allows the data to be routed around a different part of the network until it reaches it's destination. Once it get's there it can reliably inform the source location that it arrived - again because it has those details with it. That's a pretty simple, low tech description of how the data on the Internet works today. And Remember - this was invented in the late 50's.

By the end of the 60's start of the 70's ARPA became DARPA (the D is for Defence) and the DARPANET was born. Then throughout the 70's, Vinton Cerf of Standford University and Bob Kahn from DARPA worked on the network method described earlier - better described as a Protocol - and came up with what we now understand to be TCP/IP (Transmission Control Protocol/Internet Protocol) and by the end of the 70's there were about 100 machines connected to the ARPANET but now things started to move quickly. And right there is the first use of the word Internet, but it's still in the lab, hence i0.5.

i 1.0
Between '81 and '83 the National Science foundation developed a network called CSNET and the DARPANET people wanted to share info with them. The two were connected. TCP/IP became the protocol to run these two networks and the University of Wisconsin developed DNS (Domain Name Service) to help users find servers without having to know the IP Address. Suddenly the Network had about 500 machines on it. And it's at this point that I believe we had Internet v1.0, later to be renamed Web.

Of course it still wasn't available to the general public (the Department of Defence still ran most of it), web pages hadn't even been dreamed of and whole thing zipped along at a meagre 56kilobytes per second. IBM got on board with BITNET (Because It's Time) who eventually merged with CSNET to become part of the National Science Foundation and by 1987 there were 28,000 machines (or hosts). The network was straining under the load.

During 1988 more bandwidth was added (up to T1 speeds and in some places T3) and the number hosts doubled with it. Then, at last in 1990, the Web was born. Tim Berners-Lee was working at CERN and he had the bright idea of "hyperlinking" documents together which gave birth to HTML (HyperText Markup Language) and the now globally recognised "http://" or HyperText Transport Protocol as used in URL's (Universal Resource Locators) and instantly - Whallop!!! 313,000 hosts!!! Everyone wanted to be on that bandwagon.

At that very moment I was just getting started on my IT career. The company I worked for had an Amstrad 1512 (oh the power!!) and a Triumph Adler. Windows just about existed, though not in any form that most people would recognised today, and a new version was on it's way called "Windows for Workgroups". This was Microsoft's first foray into the networking world. 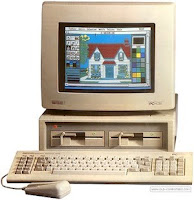 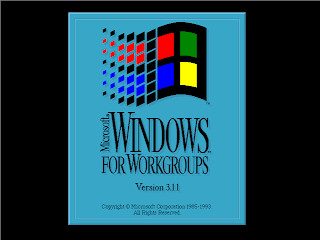 i 2.0
CERN released the WWW into the wild in 92 and in 93 the world's first web browser appeared. Mosaic. I can still remember uucp'ing it (because you didn't download back then) onto a SCO Unix machine and firing it up and seeing at least three links to places I didn't really want to go to. But there was Gopher and Usenet, of which the kids of today have long forgotten or didn't know existed in the first place. Such was the promise of the World Wide Web in those heady days. But the hosts didn't stop joining and in no time the first million were connected.

This is the point that I believe we had Internet 2.0, I guess renamed Web 1.0 and we lost a version number in the process. Which is why to my mind it's Internet 2.0

This was the same time that I got my first email address - not that anyone I know had one, so email was one or two a week - what bliss. I still have it today, and still use it - long before this little upstart, Google came along. Cliff Stanford of Demon used to send emails to customers personally back then - can't imagine Sir Richard Branson doing the same for Virgin Media subscribers today.

12 Months later and there were 2 million hosts and the end of 94, 4 million. 1995, saw 6.6million. and then in '96 - Supernova!!! 16million hosts!! One of which was mine. Well I say mine - As IT Manager, I'd developed a site for the company I worked for and in 1996 it went live online with the other 16Million. It might still be around - along with the rest of the Internet in the WayBack Machine. Take a look for www.westcode.com, and then later for www.btr.com. Of course in the UK at that time there were very very few, so I really was, just for a short time, being smart and prospecting the Internet goldrush that defined the decade. And they just kept on coming and it kept on groaning and thus growing.

How many are there today ?? Well, that's a very good question and I'm pretty sure it isn't one that many people can answer. There are about 1.8bn users worldwide, The CIA factbook has it at 676,315,916 hosts or roughly 0.6bn

i 3.0 / Web 2.0
Mobile Internet usage is highly pervasive now - thanks to a plethora of devices and many of these devices have GPS receivers in them. This is the space that Internet 3.0 (or Web 2.0) will exist in. Geo-located internet services are few today, but likely to become many. Most things you want to know or deal with have a geographic context, so it seems like a very obvious extension. Exactly what these services will be no-one can say for certain. The more obvious one's already exist, but as developers and users work out what they need to get things done, then more will come along. Couple this with faster connectivity globally available and before you know it you'll be stood under the eiffel tower watching a 3D documentary on how it was built, with the builders stood in front of you showing you round and talking in whichever language you happen to speak as if you were right there with them. And all of this from you geo-locating jacket which has the hardware built into the collar and has been going through the washing machine since 2012..... probably. Sit back and enjoy the ride. I think it will be quite pleasant. Good luck and Good day to you kind people of the Interweb (whatever version you may be).