iPad, You Pad, We all Pad together...

on March 30, 2010
Right then – let's try and get this subject out of the way now before we all get bored of it. Honestly, in the tech world, you're probably not going to here about anything else besides this for a week. Once they get that big ball rolling, there is simply no stopping the world and his wife commenting on a new piece of hardware that they have in their grubby little mitts. You guessed it, I'm talking about the iPad. I've hinted at it a few times, and pondered it a while, and have come to the conclusion that the only way I'm going to deal with it is by spewing forth a blog entry based on a stream of consciousness on the subject – so forgive me if we end up talking about something completely different, but I will try and stay on topic as best I can.

Those of you that know me, will know that in recent years I have joined the cult of the Malus Domestica (or tree potato as I like to call it) and for my 40th self-birthday present (what an utterly brilliant idea self-birthday presents are by the way) I took the leap into the virtual unknown (for me) and went out an bought an iMac thus turning my back on Bill's bloatware money machine for ever. I removed the windows and started eating fresh apples as it were. Well, perhaps not forever, Starfleet will insist. They have so much to learn still, but you really should get your fiva-a-day. My reason for pointing this out, is that in theory I am not totally unbiased, but you should be aware that I'm not looking to buy one and I'm not trying to sell you one either, I'm just trying to follow the facts without falling off the precariously balanced log.  OK – Enough of the similes, lets get to the facts. 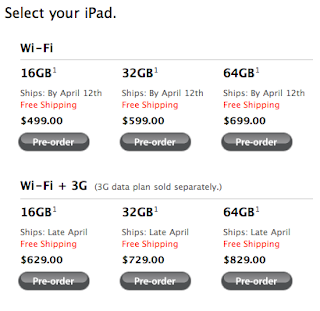 As you're probably aware the iPad has been available for pre-order on the US Apple store for some time. They range in price from $499 (£333) up to $829 (£553), so slightly above the price of the bottom end of the laptop market.

The image on the right shows the full breakdown of memory vs price, with $629 being the starting price for those that want to make use of 3G connectivity as well as WiFi.  Personally I have no need for a 3G version that I'm aware of, as I already have my iPhone, so what would I need it for ??  I'm sure there is an app somewhere out there that's waiting to tell me the answer to that, but I'm not feeling it so far.

Official release date is April the 3rd, so between now and then we can expect to hear an awful lot about the impact this machine is going to have, the number of units they've sold in the first nano-second, what's awesome about it and what sucks about it and anything else the tech-heads can think up to keep you interested.  You've got to remember that even now, it's only a very few critics/writers that have actually got their hands on one and most of what you read is based on speculation and press releases.  The developer community are not allowed to even hint that they may (or may not) have been in the vicinity of one during the development of any of the products for it.  Apple have been uber-paranoid about the entire thing, and that has just helped build it's reputation in the minds of those that are half interested.  It's a very clever marketing trick, which of course they've played before - iPhone, iPod etc etc.  In fact this fluffy-wordy-maybe-stuff has already started appearing, and here's a few of the more salacious snippets I've heard.

"The iPad is reshaping the Internet iPad doesn't run Flash. If your website uses Flash, it won't play well on the iPad. Turns out, a lot of people want their sites to look pretty on the iPad. So the internet's already starting to look different."

"The mystical, magical iPad experience starts this Saturday, April 3, and if you haven't already pre-ordered your only way to get one for the weekend is going to be to fight the rush at retail. Apple has confirmed that all 221 of its Apple Stores will have the wunder-tablets on sale, and has also confirmed the Best Buy rumors, indicating that "most" of the big-box retailer's locations will have them. Stores are set to open at 9:00am, so we figure you can probably roll on over there at 8:45 or so and get a good spot in line."

"We're getting a huge influx of reader emails reporting Apple's emailed that their pre-ordered iPads are being shipped. They won't receive 'em until Saturday, but if anyone does get one early they know how to get in touch"

"We already knew that the iPad would be getting a few pieces of software that haven't shown up on its tinier, phone counterpart -- but now that a few screenshots of forthcoming apps for the device have reared their head, we're getting a clearer picture of just what this thing will feel like. If these shots of the new Yahoo! Entertainment, Bento, OmniGraffle, and Brushes are any indication, the iPad will be doing a lot more than just zooming up your Facebook profile. There's definitely an emphasis on content creation, file exporting (if not saving), and syncing with desktop versions of some of these apps, and Yahoo!'s work (alongside Brushes') shows that we've only begun to scratch the surface of what interfaces will be like on this device. We're sure the next week will be filled with all sorts of these kinds of leaks, but for now you can cherish the moment when you first laid eyes on your new way to check a TV schedule."

Are iBooks already getting pricier? So this is curious: Just a few days after screens showing iBooks Store ebook prices leaked, revealing a ton of $9.99 bestsellers, a fresh leak shows a bunch are back up to $12.99. Say what?"

My favourite has to be this one though:

"The iPad and Airport security Questions. The iPad raises a lot of them. Like, "What's gonna happen when I carry it through airport security? Will I get fingerbanged by the TSA?" So, we asked the TSA: What's the official "iPad airport security policy?"

Really?? Oh for the love of... My conclusion therefore is thus:  It is impossible (and would be stupid) to try and decide on an opinion of the iPad until it's available in the wild so to speak.  It's a bit like going to the Zoo and seeing a caged Lion.  To the untrained eye, this would be conclusive proof that lions are lovely big fluffy cats that roll around and layze in the Sun all day. Awww bless. Wouldn't hurt a fly.

I'm still not buying one until I know whether it's likely to rip the heads of my next door neighbours or not, and the same goes for the iPad.  Clearly I've failed to put the subject to bed, but at least I've put it off for a while....

In other news.... Daughter's Birthday Bash went very well.  Most enjoyable evening was had by all. Mrs G and I even managed to sleep throughout the 1AM singing. Bless her...

Oh and as we're very nearly at the end of March, you might like to know 750words.com has me recorded at 15,310 words so far this month. Not bad considering I missed the start of it completely.
750 words Daughter iPad