on April 10, 2010
Arrived in the north of Wales after a mammouth 4 hour drive. Insanely twisty turny roads and little lanes meant everyone was tottally shattered. But a lasagne and a beverage and a good old natter made it all less painful. It's a very small 2 bed weavers cottage of sorts with ane extra room tacked on the back as a third bedroom. All very quaint and feels like the middle of nowhere. You can (during daylight hours) see the sea, which of course means we can eat our sandwiches and not before. Much like last weekend in scotland, 3G and wifi are nowhere to be found, but I was able to pickup 02.ie, which of course comes from what can only be an enormous transmitter somewhere in Ireland. Hope I don't get charged european roaming fees for using it for 10 minutes. That would be criminal.

A beautiful morning feels like summer has arrived although we all know how deceptive that can be. The plan is a walk and late last night we discovered that we have a tyrannasauras in our midsts. This actually means that we will be walking with dinosaurs. She knows who she is. ;-)

So post bacon buttes, coffee, tea and orange juice we decided from a large collection of walks that mother maintains, where we would be going. Caernarfon (pronounced car-nar-von pretty much) was the destination of choice and is a mere 15 miles from the weavers cottage (that probably isn't) so about 20 minutes drive. We pulled up in a car park next to the castle, which really is a proper castle. Not one of those, sort of a castle type places, but absolutely massive and completely dominates the whole western edge of the town overlooking the estuary out to the Irish sea. 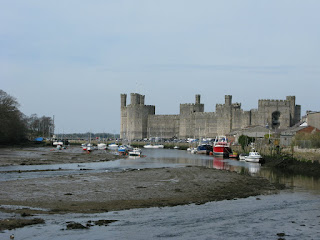 The walk was a six miler, so not massive, but very pleasant and in fact so sunny that I got my first sunburn of the year, and have instantly reverted to my naturally suntanned colour of lobster red. We walked from the castle, out along the bay and then inland and cross country and eventually back around to the castle. A spot of lunch in the Angelsey hotel on the front - Mrs G and I had the Tuna Melt, L&L had the scampi, and M&D had Jacket potato and Steak&Ale pie respectively. All were well fed and I think generally happy with it. L&L's chips were possibly a little over done.

From here we had a wander around the town - which to be honest was a bit of a surprise. I suppose I expected it to be very touristy, which for many parts it is, but then there's the rough element as well. A Pound stretcher features as a very prominent store off the main square and there were many/several youths of the early twenties age group with rather podgy girlfriends each of which had a pram in tow and carried 24 cans of some non-desript cheap larger. This bothers me and makes me think of Mr Cameron's broken britain talk - although this doesn't mean he automatically gets my vote. I am trying very hard not to get on the politics subject again, but it keeps getting in the way of everything just lately. See tomorrow for an update on the elected MP story.

An ice cream and then a wander to visit the "re-generated" area of the town which is known as Victoria Docks. Beautiful to look at, but boring to spend any time in. Someone has obviously spent quite a sum of money trying to smarten the area up, but it's essentially a bunch of expensive flats overlooking a marina, a cinema/theatre and a single shop. The shop is very nice and we bought some posh-ish souvenirs, but it's no Gloucester Docks - not that that is a great deal better, but Gloucester Quays does have a very nice floor ;-)

So then to the journey home, which was far more rapid than the journey there in the first place. Friday night from the Gloucester area to North wales, would ordinarily involve travelling up the M5 then the M6 and then across country, but the magical TomTom traffic plugin suggested that actually this would be a 4 hour trip and that going across country avoiding the motorways would take 3 hours and 45 minutes. We went with this, and it actually took about 4 hours, but we were constantly moving rather than sitting parked on a busy motorway just outside of Brum. The return came in at a fantastic 3 hours and 20 minutes using motorway pretty much all the way. But then it wasn't Friday night. Say no more.

SAturday evening saw Auntie S's kids staying with us while she had a night out with M and a very entertaining Video Skype conversation with A&L. More on that tomorrow though. Time for bed. So night all. Stay safe.
Family Sister Travel Wales