on May 20, 2010
I'm not a quitter. In fact usually the trickier something is the more I dig my heels in but just lately it's getting to a point where I'm starting to think quitting might be the only way to maintain any level of sanity.

Things have been unsettled for some time at Starfleet begining with the erosion of local engineering staff whose tasks were moved to another 'low cost' planet in the system. More recently there's been the removal of a minor perk as part of communications provision. Then there was a bigger chop in the form of long term stability and what happens at the end of your tour of duty. Worse still has been selection of the away teams. On top of this, the leaders of the planetary system I've been exploring have negotiated a new method of reconnoiter which has led to a steep learning curve for all involved. Simultaneously we have a complete replacement to the weapons system which I've been trained on - although many of the team are still in the process of this.

Well that should be enough stress for anyone shouldn't it? You're existense on board the ship is in doubt and they redefine your current research project, give you new weapons and take away your longer term cushions. Is it? bollox!

Let's put in place a new process for doing everything which takes away any percieved control of destiny that we as crew members may have had. Furthermore let's make the crew implement it - afterall they haven't got anything else to do - like make Some FECKIN MONEY FOR STARFLEET!!! Can you tell I'm not impressed?

For me though, the straw that's weighing that little too heavily on my back is the news yesterday of the loss of one of our more senior crew who has been extremely helpful to me and many other crew members over the years. A torch bearing guide through the foggy lower decks. He's going where no man has been before and will (in my opinion at any rate) leave a large hole.

So I do hope, dear reader, that you'll understand if I loose the plot and - as they say in America - Go Postal!!! It would be imminent if I was a complete loon - which just for the record, I'm not. All the same, there's only so much bullsh!t that even I can put up with...... Arrrrgggghhhhhh!!!!!!!

Now I'm 110% certain that no-one at a certain level (or above) at starfleet reads anything I ramble on about, which is a shame. It's a shame because if someone at Starfleet just took 10 minutes out of their day and watched this, they'd understand why they're in the situation they're in and better yet, they'd fix it!!

Motivation is at all time low it would seem, and this eminently sensible research points to 3 concepts: Autonomy, Mastery & Purpose which could turn it around... Perhaps I'll bring it up next Tuesday - unless I get fired

Still - at least I know it's falling on deaf ears somewhere......

This brings me neatly onto "Going Postal". If you've got Sky and have read any Terry Pratchett and enjoyed it, then I'd seriously recommend sky's adaptation of "Going Postal" which will be the 4th novel to be filmed and is scheduled to be screened over the forthcoming bank holiday weekend (30th/31st May - Sky1 and Sky1 HD)

This is the third adaptation that Sky have carried out for the great Discworld series
They started off with "The Hogfather" in 2006 with a 2-part "movie" that closely followed the plot of the novel. Briefly, the Hogfather, who is the Discworld equivalent to Father Christmas, has gone missing and Death is forced to take his place while his granddaughter (yes, Death's granddaughter) Susan attempts to find out what happened. But then if you've read the book, you'll know that. 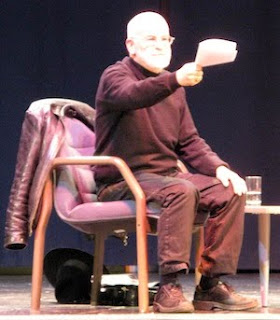 In February 2008 I was lucky enough to meet Mr Pratchett at a literary event in Bath (close to his home as you may or may not know). This was just after he'd "announced" to the world the condition of his Ahlzhimer's disease and while that subject threatened to overshadow his appearance, Mr P wasn't having any of it. Sympathy is not really what he's looking for. He is however, looking for a cure. I digress. The point I was making is that he made a fleeting (Hitchcockian) appearance in The Hogfather and I asked him if he was considering ending his writing career in favour of acting (assuming he could convince anyone to make more of his novels into films). Bit cheeky of me I know, but from what I know of the man, he likes a bit of a giggle and this proved to be true. His response surprised most people in the room: "I'll certainly be returning to the small screen and sooner than you think. Sky are screening the next two books in a month or so's time, though I feel it's unlikely that I'll show up at the oscars anytime soon." But then I knew it had been made before I asked the question....

The second outing is from Mr P's first two books in the series, "The Colour of Magic" and "The Light Fantastic". The production team have clearly upped their game and David Jason just slots straight in there perfectly. How did I know about it's existence when I asked Mr P the question? Well, I was lucky enough to have seen some of it being filmed in Gloucester Docks.
For those non-Discworld reading individuals that don't have a clue what I'm on about the first three minutes of Hogfather, which outlines the world this is all set in can be seen here, but again, If you've read the books, you'll love it.

So here for you delectation are the trailers to all three adaptations. They just keep getting better.


The Colour Of Magic

Seriously... go and read the books - they're a proper treat.

Tuesday next will be a turning point.
Discworld Movies Starfleet