Two more days of this ranting....

on May 04, 2010
The weather has returned to glorious sunshine now that the bank holiday has packed up and shipped out until the end of the month. Haven't heard yet but no doubt Scobi would have had a sleepless night with the constant drumming of rain on the roof of his 'van over the weekend.

The Ash is back! and I'm not talking about Paddy Ashdown, although it is interesting that the volcanic ash cloud is currently effecting Northern Ireland... Paddy Ash Down... geddit.. Oh dear. Perhaps it's a sign (of your pish-poor joke telling. Ed.) There's one in there somewhere.

And at last the end is in sight. There's only two days left until #ge2010 and the three potential leaders are all guns blazing for the final push. Suddenly it's getting interesting again. It's definitely been flat since the last debate. I was of the opinion that either the LibDems were heading for a landslide or the majority of Internet users were LibDem judging by the various polls, voting websites and twitter but all of a sudden last night there was a massive influx of Labour tweeters on the back of Gordon Brown's speech to Citizens UK. Quite bizarre and makes me wonder just what the hell is really going on. If I was prone to conspiracy theory (and occasionally I am) I think I'd be seeing things like this...

Gordon was clearly on the ropes with such low popularity at the beginning of the canvasing. The Conservatives thought they had a shoe-in, but just to be certain they'd organise a media mogul's support just like Mr Bush in the US. I fully expect Sky news to broadcast a result in favour of the conservatives long before the count is finished, just like George W's term was announced by Fox news. Interesting that the same man is behind both organisations. The Sky News Poll of Poll's has had the same percentages on it for over a week now, suggesting that the Conservatives are way out in front. Gordon's speech was shown on the BBC, but Sky's version of the story focused on the member of the audience that heckled and stood up with a "No Nuclear Power" sign in the middle of it. The Times, The News of the World and the Sun have all come out as conservative (They follow their bosses instructions reasonably well) and this morning we have Labour candidate Manish Sood. He claims "The prime minister's recent policies are a 'disaster', including the rise in income tax" he tells Sky News (oh??). "True Labour values have 'gone missing'" he adds arguing that "the party needs to be cleaned up". I'm not disagreeing with the sentiment per-say, but why's he telling Sky ?? Money well spent there Bobby. It seems pretty clear that Mr Murdoch (owner of News Corp) wants a Conservative government and is doing everything in his power to get one. Of course I should point out that this is a conspiracy theory with the key word being theory - Just in case Mr Burns utters the immortal words "Smithers! Release the hounds!" 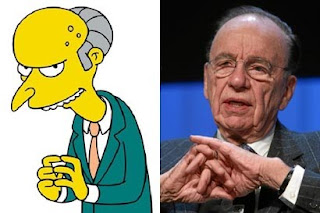 What Mr Burns - sorry I keep making that mistake - Mr Murdoch seems to be forgetting about is that the Great British public while being able to display extraordinary levels of dumbness on occasion are by no means stupid. His bullsh*t tactics might have worked in the US, but I refuse to believe that the same can be said of the UK. If Monty got his way we'd have a Conservative Majority, but if things are as close as the pundits and pollsters would suggest, then I would expect the outcome of Thursdays votes to be a hung parliament with a Lib Con split. This is all conjecture though - so we'll just have to wait and see. Unless you watch Sky News or are in Bristol East where the postal vote has already been announced!!!

Well it's back to the grindstone and a three day week for me as I'm recovering from shock all day on Friday. Not the shock of the result but the shock of the fact that I've taken such a huge interest in politics!! Last couple of points...

This website is yet another interesting take on tweets and elections. Why not join in and cast your vote. http://www.10downingtweets.co.uk/

And if you want a proper grown up well thought out take on the whole kit and caboodle (as opposed to my inane, immature, misunderstood, diluted and over simplistic view - probably) then you could do a lot worse than read Mr Fry's take on it, who always as something interesting to add.

How the hell did that happen ?? I'll leave you with this final thought: Of the 16 AAA rated economies in the world 10 are governed by coalitions - and 12 by Proportional Representation - why isn't ours?
Conspiracy Election Scobi TV Volcano