on May 07, 2010
The WTC was exciting stuff last night, especially as Jugs and I had a massive debate (careful - Ed... some would call it a stand up row). We both thoroughly enjoyed it and actually found ourselves agreeing with each other on most points. The show-stopper for both of us is that neither party does everything we want them too, while they both do things we do want them too.... If only they could sort that out, we'd all be a lot happier. It was a lot of fun, and was an open and honest robust debate of which this country needs more.

Anyway, beer and curry and very very late nights don't make for a settled tum it would seem, and I spent a good hour (around about 4am) chucking up the said curry and beer and was joined by daughter in the hurling. This is more worrying because she hadn't been out on the beer & curry and she was very ill in a similar way last your - bad enough to have been admitted to hospital for a spell. She had a quick visit to the doctors this morning and guess what... is now sat in the hospital having blood tests and general prodding and poking. Clearly we're concerned that we don't have a repeat of last years worries...

So then to the election itself...Ah bugger!! I foolishly thought we'd have heard the end of all this bolitics, but to no avail. The great British public have stuffed it all up and we now have a hung parliament. OK, so I realise that all sounds very negative and in actual fact it isn't. In my humble opinion it's the best result we could have had. And why do I think that?? Well, it's the only result that beautifully highlights the disastrous voting system we have in the UK and so could (and really should) lead to there being electoral reform so that we don't have this sort of cock-up again in the future.

The issues of the "First Past The Post" system are eminently clear when you see the results. Still a few to come, and I'll update this table as they do...

The disparity between the number of votes and number of seats is sickening and needs to be fixed. 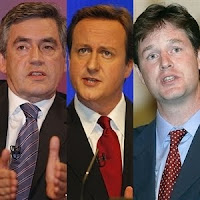 Nick Clegg (Leader of the Lib Dems) has acted selflessly and as many are saying, statesman-like in the light of the result by suggesting he'll work with the conservatives. They have the most votes so that is the fairest way to go regardless of policies, although the incumbent - Namely Gordy - is supposed to have first dibs. No doubt the only caveat to this will be fixing the electoral system. Perfectly sensible and correct. This gets my vote without a shadow of a doubt.

But then this is where it all starts to get interesting. What happens if Cameron does the deal with Clegg and then NOT deliver reforms ?? There will be hell to pay in that situation. Worse still, what if Cameron goes for a non-majority Government and not do a deal with anyone ? I'd like to think Her Maj won't put up with those sorts of shenanigans and tell Dave (for we can call him that) to pish off and come back when he's thought about what he's doing. I can hear her now... "You've all been very naughty boys! Stop messing about or you're all be on the naughty step.". This is when they have to be most careful. Any hint of party politics when they should be putting the country first should be exceptionally career limiting. Interesting stuff.

Gordy makes a complete U-Turn to try and save face and power by suggesting that a referendum on electoral reform should be the next step. Yep!! Should have been the previous step, but better late than never.

And then "Dave" said this... "I know this will be a new, modern conservative party in parliament" You what? Hang on. Let's be clear now Dave. He then goes on to say that he realises that change is needed and that the public want it fixed. He publicly thanks Nick Clegg and wants to work with him.

This is potentially great stuff - it's actually a re-run of the "stand up row" - sorry - "debate" - that Jugs and I had in the pub last night. There will be lots of grief in this bastardisation of a party, but if they're serious about the country (and not the parties) then there is still a chance that real change could exist. So there you have it... #IAgreeWithNaveOrIsItDick has to be the twitter hashtag for this. Let's just hope that electoral and parliamentary reforms come first. The fact that quite large numbers of voters were denied the chance to vote because of our "Victorian voting system" (according to the Electoral Commission) makes it clear that this has to be the priority. But careful Dave - not just an enquiry... a fix is the only answer... Solid foundation for a solid future.

As for the betting - sad to say I didn't win anything on a Lib Dem win, but I did have a win (a massive 62p) on the first ever Green MP (Brighton) and I've had a little flutter that the next General Election (which I presume the twitterati will be referring to as #ge2010.1) will be held in 2010. In summary, I'm happy to say I told you so!! and word of the day?....