on June 22, 2010
Some people have no conscious of what goes on in the rest of the world. I'm not bemoaning these "individuals" but I do worry for the rest of us when such uniqueness invades the day-to-day drudgery of those that have important topical issues to wrestle with. Let me enlighten you by way of an example.

I am engaged on a fairly simple project (one of a plethora) on board the enterprise. The project manager is clearly an "individual" having planned a lengthy conference call requiring much concentration at... wait for it..... 3pm on Wednesday!!. I may have over reacted somewhat when the PM asked if that would be acceptable. "You are joking aren't you!?" was the response I gave. "Do you not know what is happening at 3pm on Wednesday!!?" A tad harsh on my part to be fair. I back peddled and made light of it as much as I dared without sounding like a complete buffoon. (A challenge as you can imagine). Regardless, it would appear that the call will go on and as a direct result of this individualistic behaviour, England will once again be knocked out of the World Cup and we will have to endure another 4 years of harping on about 1966. Sorry lads - I can't be there to cheer you on - I have to be on the phone. I mean, really.... is that acceptable?

In other news, daughter is onto her third shift as a proper copper. Now, every time I hear a siren in the distance, I wonder if that's her whizzing off to something exciting. It would be a worry, but I know she can handle herself since she's had the correct training and has plenty of support. To be honest, I really wouldn't want to get on the wrong side of her when she's all kitted up now and she's over the moon with the whole thing. If she's happy, we're all happy. This morning she was up at the crack of dawn to go on an operation. She could tell me, but then she'd have to kill me, so no doubt we'll find out in the fullness of time. I think it's the rush hour traffic and ANPR cameras, so I'm walking if I have to go out.

Yesterdays iOS4 upgrade went without a hitch for me. Just past 6pm UK Time iTunes downloaded the package and off it went. The whole process took about 25 minutes, although after I disconnected and then later reconnected to iTunes, it had to rebuild my photo library on the phone to support the new faces & places features. These features already existed for me via iPhoto on my desktop, but it's great that they've gone mobile too. 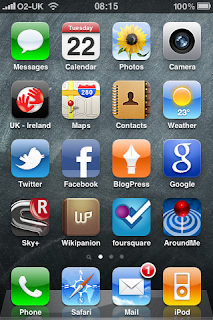 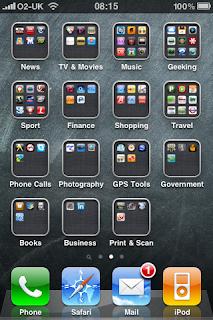 Without doubt the best features are task switching and folders. My apps were getting out of control, but all much neater now. There are loads of other little tweaks as well which all add up to a very useful and beautifully executed piece of kit. Hopefully I'll find out how fast it is on the new A4 processor on Thursday - but that will all depend on stock.

Today brings us the joys of an emergency budget.  What could be finer on a nice warm summers day that to have your finances ripped to shreds by what appears to be an 25 year old snob in a suit ?  OK I may be exaggerating slightly, and perhaps he's only 20 - who cares?

I hear this morning though that there's actually going to be an increase in income tax threshold of £1000. What's been leaked so far are the following:
All in all this may not be as painful for me as I'd first thought, but I won't know for sure until after the Noon to 2.30pm announcement. No doubt the BBC will have a budget tool on their website that can help you analyse the pain. They've already got one to help decide what you would cut if you were in the chancellor's shoes. What would You Cut

Finally - didn't North Korea do well? I think we should all be concerned for the welfare of that team knowing the regime that they come from. To be fair they are a team with a great sense of decency which can clearly be seen by looking at theirs stats so far.  They may only have scored one goal and let in nine, but they've only committed 11 fouls, the lowest of the entire tournament. The next closest being Spain and Serbia both with 15.

Spain seem to have redeemed themselves somewhat with a 2-0 victory over Honduras, but they've still got some football to play - as have the rest of us. Two thirds of the way through the group stages now and it is beginning to get interesting.  Come on Engerlund!!!  Even if I can't support you tomorrow, at least I can rant and rave about it on here :-(
BBC Budget Daughter Football Government iOS iPhone Specials Starfleet World Cup