I wasn't expecting that!

on June 21, 2010
This week's Headlines:
No Blog update yesterday
Today is iOS4 day!! WooHoo!
Tomorrow is Public Sector Pension cuts and Budget day UhhOhh!
Wednesday is England's last chance at the World Cup
Thursday is iPhone 4 day
Friday is the end of the week!!

First up then, iOS4. Due to hit iPod touch and iPhone 3/3GS users today, the renamed apple Operating System (iOS4) is eagerly awaited. You need to have upgraded to iTunes 9.2 already. Likely availability time is about 5pm (ish) UK time - once the lads in California are out of bed and they press the button. Previous rollouts have been painful due to the demand, but hopefully this will have been resolved this time round and you'll get some cool new benefits without having to buy a new iPhone on Thursday.

Tuesday is Emergency Budget day. Always a bit disturbing when the government use the word emergency. Tends to make me feel like they don't actually know what's going on. The boychild George Osborne, has already said Britain is "on the road to ruin" unless the deficit is cut." so we can expect it to hurt. Having said that, they've already leaked (or announced depending on your preference) that there's to be a freeze on Council Tax for a whole year from next April, which I'm obviously not going to complain about.

The headline grabbing news seems to be about the public sector pensions getting a hammering. About time to. After all, the private sector has been trying to patch up it's pension deficits for the past 5 years at least, so I can't see why the public sector shouldn't be brought into line as well. Of course it's not going to be pretty, especially if you're one of those public sector employees who is going to loose out, but it's for the good of the nation (we're told) and at least you're not on rations. Inevitably this is going to lead to strike action as for some reason the public sector unions seem to have survived for the time being. Expect a rough couple of years and plenty of emigration.

Perhaps on Wednesday, the eleven lads that have allegedly been playing football for us in South Africa, can show us why they get paid such fantastical amounts of money and lift the countries post budget depression. After the last game I'm not going to hold my breath, but then we love an underdog and we love a challenge, so it could be great after all. It's anticipated that most of the country will come to a grinding halt at 3pm on Wednesday, so don't expect to get much done. Fabio Cappello is said to be all set to resign if England don't get through so for his sake lets hope they're going to get their act together and stop unemployment rising by one more.

In discussion with Father-in-law yesterday we came up with a wheeze that might make the team a little more focused. Performance related pay. Something like a £1000 per player per goal scored, £1000 deducted per player for every goal conceeded. £100 per percentage point of possession, £200 for every attempt on target and £100 deducted for every foul. Out of interest, We ran these numbers up, and if these were the rules, the current financial standings of each team would look like this (click for a larger version): 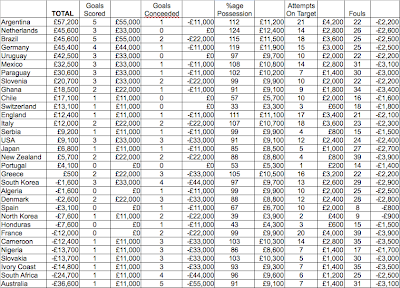 Clearly Australia owe a huge debt to their nation and Argentina and the Netherlands are something to watch out for.... Could all change yet though. Come On Englerland!

Thursday is going to be a sad day for many people when they don't get their new iPhone 4. I suspect there's every chance that I will be among them but O2's announcement on Saturday has given me a little hope. As I mentioned previously, no new customers on the iPhone meaning that they'll have more handsets available for their existing customers. Time will tell.

Friday being the end of the week is always a high, but with such a rollercoaster this week who knows what could happen. Let's say the budget cuts my disposable income in half (although half of nothing is nothing), England loose and get sent home and O2 don't have any iPhones. In that scenario, Friday will be an evening of pub and sorrow drowning. But I've got my fingers crossed and the plan is, the budget doesn't directly effect me, England win and iPhones are a plenty. Well come on.... I can dream can't I?
Blogging Budget iOS World Cup