COME ON ENGLERLAND!!! What are you playing at? As I pointed out last night, as a team, they've made a very good case for reducing the premiership's wage bill. And as for Rooney complaining about the fans booing..... Play some bloody football then! It's one of this subjects that could really get me fired up, especially as not knowing anything about football, makes me perfectly qualified to rant and rave about it all I like. Seriously, how is it that these blokes, some of whom can afford to buy my house in cash every month with their wages, aren't playing their hearts out for their country? In fact one of two of them could probably buy a couple of my houses every month, which is even worse!. These chosen few should realise just how lucky they are to playing in the most prestigious tournament of their sport in front of the entire planet and on behalf of their country. Instead they looked like they'd just got out of bed and would really rather be playing golf.

I was surmising that it was something to do with Fabio Cappello's decision not to play Green in goal after last weeks cockup. Could it be that the rest of the team felt this was unfair and undermined their confidence after publicly supporting Green? If that is the case, this is not the forum to be debating the issue. The pitch is for the game, the dressing room is for the arguing. Look at the mess they're in now. Stop your moaning. You're big house will still be there when you get home, but right now you've got your work cut out - no pressure! Much! Not that I know anything about it all.

On the plus side, these local lads have done us proud with a suitable shouty anthem to join in with. (I notice the lead guitarist is particularly awake throughout the entire performance)

Now everything's gone a bit Pete Tong. One more game in the group stages and we could be off to the big leagues, as long as we don't fail miserably against Slovenia. We need a very strong and decisive win Get your Vuvuzela's ready!.

I already mentioned the Vuvuzela app (which it turns out is now only one of 16 that do similar things), but I didn't mention the World Cup apps. There are at least one hundred of them. App development is something that has gone completely ballistic since the launch of the iPhone and the App Store, not least because it's something that's not particularly difficult to do and can generate you huge sums of money. I can't deny I'm tempted, but donating enough time to it has always been the show stopper thus far.

Of note this week, is IBM's release of the Wimbledon App, a must have for anyone interested in following the tournament.

I now NEED the iOS 4 upgrade if for no other reason than to be able to manage this plethora of code that fills up my phone. Can't see the wallpaper for the apps (to coin a phrase)

Oh yes and O2 have played a blinder. No new customers on the iPhone 4 until the end of July!! On the face of it, this is crazy talk, but it's great news if you're an O2 customer looking to upgrade. You might (and I stress might) actually get your hands on one. It's also a pretty ballsy move on O2's part. Great to see a company putting their existing customer base first and not focusing solely on new business. Having said that, their customer base is the largest section of the UK iPhone market thanks to their original exclusivity deal. Now that's gone they're maturing the customers that put them back on top.

On the subject of growing up and responsibilty, I saw this and yet again nearly died laughing. 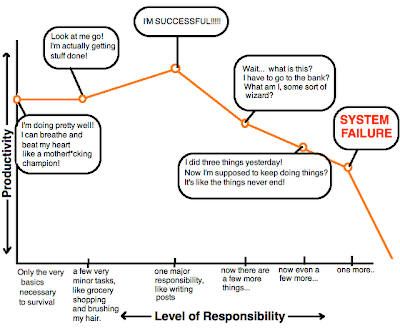 As a result you really must go and read this: Hyperbole and a Half

Finally, it's father's day this weekend, so Mrs G and I are off down to Wiltshire for the day to see Mr Ball senior and a spot of pub lunch. Daughter's back to work and son's @rse will no doubt be stuck to the sofa. He's mountain biking tomorrow though - so I suppose we can let him off.

Come on Sunshine! Breakthrough and give us a summer of roaring lions!! Enjoy.

PS: As a taster for the fun that awaits us next week I just want to share a quote with you from Blogger Jeremy Rowe:


VAT is the worst tax of all. It gives the impression of fairness (no one is exempt, the more you spend the more you pay in tax) yet disproportionately punishes the poorest because they naturally spend a higher proportion of their income (VAT accounts for 13.6% of the gross household income for the poorest 10%, compared to 4.1% for the wealthiest 10%). In addition the wealthy can afford to have their accountants play with the books and claim large chunks of VAT back from the taxman – those on the minimum wage cannot.