on June 24, 2010
Well actually it wasn't... It was Jermain Defoe that kicked it in the goal (well off the goalies hands) - but none of that matters. It being Thursday, today is the official launch in the UK of the iPhone 4 - but none of that matters either.  What matters is we won and we're through to the next round. This means we're playing on Sunday afternoon at 3pm against GERMANY. First point here is it's at a much more sociable time so we as a nation have no excuse for not getting behind our boys and helping them get the job done.

That said, plenty of us did get behind them, and huge numbers watched the game. According to the BBC:

Second point and more worrying though is Zee Germans. Right now they're 3rd in my table which is high above England in 9th. So far, this method of prediction has been spot on. Every team above their opposition in the table has won, so I'm not expecting good things. Here's the top 10 as of this morning:

This is against zee Germans, and we all know how that can be. Going back to 1930 of the 27 games played against Germany, England have won 12 (7 of them up to 1966), while Germany have won 10, and also won both penalty shootouts that followed two of the five draws. So we've got form. Whether form is enough to get us through though, well that's the million dollar question. Still, it will be a nice way to spend a Sunday afternoon - worrying about our national team. I predict massive sales of BBQ food from all the supermarkets this weekend, which will fit in nicely with the British weather. Very typical: 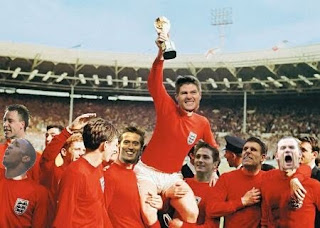 COME ON ENGLAND!!
Oh yes... It's iPhone 4 day isn't it...  I hadn't forgotten. But I had made a conscious decision not to get up at the crack of dawn and stand in a queue for one. Not least because there are no white models in stock, and Mrs G would prefer a white one. On top of that, Tesco announced their pricing plans yesterday, which look like they might be better than O2. They have doubled the amount of 3G download data and you can have a nice simple 12 month contract as well. Interesting times.

This didn't deter Son though, who was up at the crack of dawn and stood in a queue of about 60 people in the center of Gloucester.  He was there early enough to be in the first 15 or so and most likely won't stop harping on about it for weeks, once he gets his mits on it.

There we have it then - back to the drudgery.
We need a Tribble invasion - far more interesting than this stuff.
England Football iPhone Mrs G Son Sunday World Cup