Vuvu what? Sorry I can't hear you! 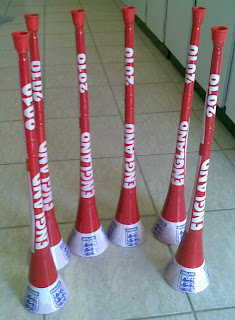 Poor old Mick McCarthy took some stick on Twitter last night during the Italy v Paraguay game. So much so that at one point his name was the number 3 worldwide trending topic. And it's all because of his voice. He was commentating on the BBC alongside Jonathan Pearce but the general consensus was that he shouldn't have been.

Whats the difference between Mick McCarthy and a vuvuzela? One has an annoying monotonous single pitch drone, the other is a plastic horn.

Got to admit, that is pretty funny.

It appears the Vuvuzela is causing quite a stir. It is an annoying sound when you hear it for a full 90 minutes. Something akin to a droning swarm of bees. Some people have alleged headaches as a result and there has even been talk of FIFA attempting to ban them at the remaining games. I think they've got two hopes there: Bob Hope and No Hope.

However, I did find out that actually the Vuvuzela has primary harmonics, and if you can find a method to cancel them out, you'll be happy. Specifically, the note is based around an A# and the frequencies are 233, 466, 932, and 1864Hz. So if you're watching the footie on something with a really good equaliser attached to it, you just need to turn down those four frequencies and hey presto!! Vuvuzela Incognito!! or some such wizardry spell.... The problem is having something with a really good equaliser of course, but I can't fix everything for you.

If you live in the other camp (the same one as Mick McCarthy incidentally) then you'll be wanting to preserve the sound of the Vuvuzela's everywhere you go. This can be achieved if you have an iPhone because (surprise, surprise) there's an app for that. Check it out here. I can assure you it is equally annoying and I wouldn't recommend blaring it out in the pub unless you're amongst like minded fools.

Interestingly, BBC News are saying that the feed they get from South Africa has already had some tweaking and further twiddling of knobs will make things worse and also cancel out some of the other atmospheric sounds (Cheering n that) which exist in a similar frequency range. Oh yes, and Christiano Ronaldo really really hates it - so it's not all bad.

[Edit]
Late breaking news - so late in fact that I''d already published this entry almost 12 hours before this news broke... but here you go. A fix from the Centre for Digital Music at Queen Mary, University of London: http://isophonics.net/content/whats-all-about-vuvuzela
[End Edit]

Finally - after watching this....