I Geek, Therefore I am 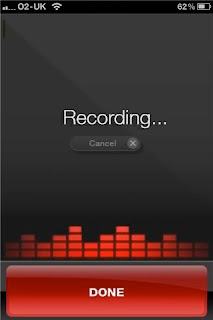 A few months ago the Gorse Fox mentioned dictation software that he was using on his PC to write his blog entry. Well, now I've got dragon dictate and I'm able to do the same thing with one small difference. I am using my phone. Vocally mobile blogging should in theory be far less complicated than it sounds....

But the question remains is it less complicated or not? So by way of an example, I have dictated this entry into dragon on my iPhone and in a moment I shall press the stop button. Whereupon, it will process what I have said and then I can copy and paste it, or twitter it, or e-mail it wherever I wish. So, let's see what the results are like....

Actually, I think that's not too bad for a first attempt. Not right, but not bad. I suspect that the whole process is hampered somewhat by my slight west country accent (Whot axe-ent be that then miy muckurr?? - Ed) but given a little practice and my best Queen's/BBC english, I'm sure it's not too much to worry about.  Having said that though, is it what I want to be doing?

The thing is, I find that I enjoy the process of sitting and typing out an entry far more than I think I would just sitting and talking to myself.  This may just be a "stuck in my ways" problem, or it could be me romanticising the role of the writer into someone who sit's at a desk with a typewriter and looks out the window for inspiration (only to find naught but the writers block).  I'll persevere for a little, but I suspect, like many others before me, I'm just not ready to jump ship and talk....

Just catching up with my RSS feeds and I see Gizmodo running this story:

It's time to be nostalgic for the days when you could count on WPA2 as the strongest, most impregnable wireless security standard. Security firm AirTight Networks has discovered a means of compromising WPA2 encryption using about ten lines of code.

Marvellous.  This is why the Digital Economy Bill needs to be repealed, before my Dad gets locked up because someone parked outside his house and downloaded the top ten singles every week for a year.... or something similar....  There is no such thing as secure.

You may have seen yesterdays news report regarding the search for the next generation of cyber security specialists. I registered and had a go at the example cypher they had and I think I did quite well. If you want to try it, it's all happening here: https://cybersecuritychallenge.org.uk/. Wound up with a piece of Hexadecimal that I haven't been able to fathom but I believe that's just because I'm not using the right tool for the job.

The niggle is that it's small, so doubly frustrating. I've been through the obvious stuff and just keep hitting a wall, but I haven't tried taking it as double-byte hex into UTF-8 (Chinese maybe) and then translating the resulting glyphs back to english.... that might do it.... or it might not... Sadly, as I'm not being paid for it, it will have to wait until I have some spare time, and the way things are today, that may be next year....