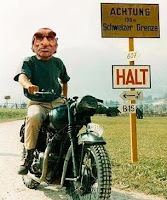 First off, the lies.... Yes we can get you out of there. Meaning, you're not going anywhere. The escape committee know what this means.

As badman has pointed out, it may have to be the glider option after all, so I'm currently trying to figure out how to get on the roof of the komandant's block with a 40ft fold up hang-glider unobserved. It's just high enough that given the correct wind direction I should be able to silently sail clear over the top of the fence and down into the woods.  Certainly not a job for the feint of heart. I'm just glad it's Friday.

Now, the secrets...
Grand Central Terminal, in New York City. Next time you're in there, (and if you haven't you've missed a treat) take a close look at the clock that sits on top of the information booth in the middle of the main concourse. It's synched to the atomic clock at the U.S. Naval Observatory and is worth an astronomical amount of money.  The four faces are made from opal, and have recently been valued at about 20 million USD.  There's also a hidden platform far below the surface that you'll never see, but which was installed for President Roosevelt in the 1930's and is still in use today.

On the subject of secret railway stations (I've mentioned the Queen's stop in box tunnel, but yesterday the Beeb published this guided tour of an abandoned tube station. (UK Only I'm afraid). It's St Mary's in East London, which closed in 1938. Here's the link: http://www.bbc.co.uk/news/uk-10612599

Phone reception now... Apple have planned a surprise briefing on the iPhone 4 antenna issue at 6pm UK time today.  Now it's only a surprise to those that haven't been paying attention.  I think they'll stop just short of a full product recall, after all they sold over 1.7million handsets in the first three days and the cost of getting them all back is estimated at around £1bn.  More likely is the opportunity for those experiencing problems (and as I've said, I'm not) to be able to walk into an apple store and exchange the unit, but we won't know for sure until this evening. From Apple's perspective I imagine the worst part of the whole story is the damage it's doing to it's brand and that can be far more costly. They have released a software upgrade which means the signal strength is now shown correctly. The only difference I'm seeing are slightly differently designed signal bars.  Very odd stuff going on here.

I think the best summary of events so far, has to be Andy Ihnatko's blog entry regarding his expectations of the forthcoming press conference. This seems like all logical and sensible fare. It is impressive just how much kafuffle it's generated. I mean... it's a phone..


...and onwards to the weekend....  which this time will involve a trip to the hospital with daughter, a trip up north for a birthday party and trip over the long grass in the back garden meaning I'll have to get the mower out on sunday if it stays dry.

Oh, and one last thing as it's Friday.  Those of you that enjoyed the Old Spice shenanigans might be interested to hear that their marketing has gone all viral (to use the parlance of our times) and you can even get "him" to anser your phone. Hope you enjoy this: http://oldspicevoicemail.com/