on July 07, 2010
The Gorse Fox refers to one of his kin as "Urban Cub" but last night a caught a glimpse of a real honest-to-goodness urban cub. Not far from our house in the suburbs of Gloucester, there is a roundabout connecting Barnwood Road, Eastern Avenue and Corinium Drive. This is it:

View Larger Map
Road names are something that hold a wealth of opportunity to the creative minds of the local council, as you can tell. Eastern Avenue clearly took hours of thought to come up with, what with it being an avenue to the East of the city, much like Barnwood Road being the road that goes to and from Barnwood. At least Corinium is the Latin name for Cirencester so it's fair to say that despite the appearance of a lack of civic pride on the part of the council, the Roman historical significance of Gloucester is treasured and celebrated. Something that can be seen all over the city. I digress.

At about 10.30pm last night, Daughter and I were to be found wandering along Barnwood Road in the general direction of the city. Suddenly from the bushes just at the end of Corinium Avenue, a fox appeared and raced across the road onto the roundabout. To begin with I took it to be a cat because of it's scrawny looking nature and it's agility, but the nose and the tail give it away, and it was obviously a very hungry fox.

Foxes are cunning as we all know, and this one obviously knows the area. The roundabout in question is referred to locally as "Rabbit Roundabout" and is known far and wide.

In 2009 the BBC wrote about the Barnwood Bunnies and last summer the council formerly recognised the home of the little hoppers by installing some artwork on the site. The giant wicker bunny was an instant hit. 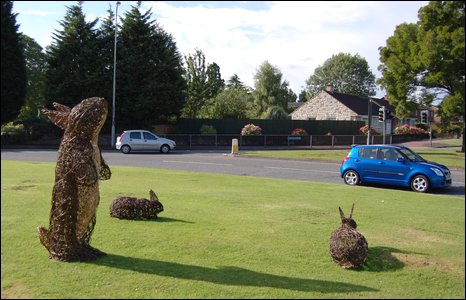 So much so in fact that within a couple of months it had been stolen. This sparked a Facebook campaign to re-instate it but thankfully the police recovered it from someones garden. It went into storage for the winter and now is back in it's rightful spot.

I haven't been down there to survey the devastation yet today, but I'd expect the worst. Bring back the hunt.... very controversial.
Daughter Gloucester Wildlife