An URL* is for life, not just for Christmas...

on July 14, 2010
All is well on the domestic front. Our wedding anniversary is just round the corner, so preparations are afoot for a surprise, although energy levels are low due to a combination of rubbish work all day and too much broken sleep.

Pleased to say that part 2 of the 'The Silence' has not disappointed. Later in the year we also have 'The Deep' and 'Sherlock' (Martin Freeman -From 'The Office'- as Watson ought to be a laugh) to look forward to. The BBC are one of the all round best broadcasters in the World and as a nation we should rightly be very proud of their consistently high quality output. Easily worth the licence fee - unless it's Chris Moyles. Just to prove the point, this morning sees the launch of the new BBC News website (http://news.bbc.co.uk and damn good it is to. They've finally ditched the lefthand list/menu in favour of a 'top of the page' horizontal menu. I haven't seen it on an iPad yet, but I bet it looks great now it's less cluttered and open.

That's my thoughts on the BBC and what a great gift to the nation it is, even if we do have to pay for it. And on the subject of gifts, my days are exactly (well almost) like this, which is in part why I shall be visiting a Starfleet/Dante location on Thursday (I might feel inspired by some of the other inmates and feel better about the whole place but I'm not holding my breath mind you). So with them in mind, I've found some 'gifts'** for my Starfleet/Dante colleagues. Without further ado, this is for them:

Let's start the day with something special for the Badman (who I'm hoping to catch up with in person on Thursday). Maple Bacon Coffee. We know how much he loves meat - especially in the form of pig (preferably mashed up and stuffed into either Hog or Sheep casings - not that I know the first thing about sausage making), and how much he loves coffee, so this must be simply perfection in his eyes. Either that or just disgusting. You can buy it here. Crazy stuff.

Just nipping back to the 80's for Scobi - who has a love of music, albeit not necessarily Gary Numan (who's still as moody as ever) and a car battery: 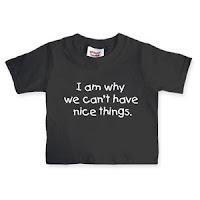 Next up, Stretch. Those of you that have read his blog will know that he's about to become a father again (Congratulations in order for Mrs Stretch). Those of us that work with him will know how tight that makes the purse strings, so with that in mind this gift is more for his future child (or even his existing one of he feels that way inclined). Either way I'm sure he'll enjoy the sentiment - to be taken with a tongue firmly planted in a cheek. You can buy one here.

On to The Gorse Fox and a much trickier one to select for. Of course we're aware of his morbid fear of the demon that is electrikery, but it would be too simple to point him at Dr. Zap, or even an appropriate T-Shirt like Stretch. But no. The perfect gift for the man who's suited and booted at a client meeting and in need of a bottle opener, screwdriver (philips or otherwise), thread cutter or a keyring.... The Exuvius Multi-Tool Titanium Collar stays - perfect.

....and Finally, he's not a blogger (yet) but he's spent time in the Southern Hemisphere and so for that reason alone, here's a Vuvuzela for the man with the compass set to left. Hope to see Mr Left, Badman and Stretch on Thursday. Pretty sure that's him on the left, and could be a Badman on the right.... Judge for yourself...


If I've missed you out, drop me an email at the contact link.
Hope that's brightened your day.

*URL's are hosted on servers not in my control and as such can be up as well as down.
**Gifts will not actually be delivered, if you want one, get it yourself.
*** Your home is at risk if you don't keep up with the Jones' (apparently) - who knew!?
Badman BBC Gifts Gorse Fox Scobi Sherlock Starfleet Stretch