Andrew Marr, Popperian Cosmology and Me

In other words, the knowledge held by a given individual mind owes at least as much to the total accumulated wealth of human knowledge, made manifest, as to the world of direct experience. As such, the growth of human knowledge could be said to be a function of the independent evolution of World Three.

So that's the quick and dirty version of Sir Karl Popper's Philosophical theory. He wrote about it in Objective Knowledge: An Evolutionary Approach in 1972.

[Ed- And your point is!!??!] OK, OK. So I don't hold an awful lot of truck with most namby-pamby pudding ideas (even though I studied hard at sociology among other things in my past) like these because they usually feel a bit wishy washy and don't really fit with any direct understanding of what I perceive to be the "real" world at any given moment. But there is something here that's a little bit different.

Namely, that there is now something fairly akin to what Popper describes as World Three. It's not 100% yet, but it's going that way. The Internet.  Monday's New Scientist ran an article that discussed Popper's theory (I had heard of his philosophy and discarded it when it didn't fit to anything I understood in the 80's) and in particular this observation of the Internet and World Three being one and the same by the co-director of the Center for Advanced Computing Research at Caltech (George Djorgovski) during the Science Foo Camp held at Google's HQ. He goes on to suggest that 2 dimensions are not enough for this volume and diverse type of data and that we should be focusing on ways of handling it in 3D. That's fine if you've got two eyes George - but be wary not to loose sight of the partially sighted - they still have fully functioning brains.

And who else should be there, at this SciFoo, but the BBC's very own Andrew Marr - now I'm starting to get scared. I mean, he's a personable enough chap, but what is he doing here, and is he flapping his arms around? Turns out he's doing something quite interesting. He's suggesting that e-readers (Kindle, iPad etc) will be the death of printed newspapers & magazines as we know them (not really any surprise there), but he's also suggesting this a good thing and as this comment is coming from a journalist, at this point I raised my eyebrow just a tad.

If I'm understanding this correctly, he goes on to suggest that news gathering journalism that focuses on small pockets of interest for small periods of time will be replaced by a sort of community journalism for the local population.  He's not talking about your local newspaper here, he's talking about the likes of me (and you if you could be bothered to contribute - you know who you are) and for that matter anyone else who has any expertise on any given subject, contributing to the propagation of it's idea to other groups.

So to bring this idea back to George Djorgovski's thinking, we'd then need some sort of 3 dimensional aggregator that gathers all forms of discussion on a given subject would then present this World Three content via a World One device. RSS feeds already provide a method to do this in the 2D world 3, and of particular interest to me lately is the FWIX approach to news gathering where it's geo-located. I sooo wish this would work properly for my area.

As Jo Marchant from the New Scientist points out, this may not be the most unbiased form of journalism, and certainly may be unfathomable for some readers if the writers are such experts - but then we all have the capacity to learn. It's an interesting concept.

Having read the article, I sit and look and stare at it sitting there on the Internet looking back at me and this thought has struck me. "Why aren't I involved in such fun thinking as this?" I get to think about technology, sure. But not in an interesting - what are we doing next? - kind of way, which sadly I used to. It breaks my heart. Somehow I've missed the boat and slipped into the water. For a period of time I did cutting edge stuff with technology. I was an Internet pioneer ... *sigh* ... and then I got caught in the money machine.  Someone labelled me up as something I wasn't and put me in a corresponding box to be a square peg in a round hole. 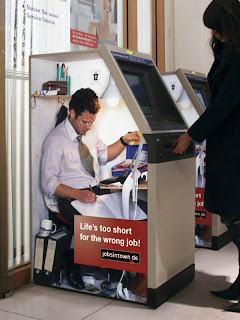 I work at Starfleet - someone here must be paying attention to such goings on at SciFoo camp?  And more importantly should be deep in the design phase of aggregators to provide such localised 3D content....  This is the sort of thing I should be working on - instead of counting pens and pushing pencils only to be told they're the wrong pens or the pencil's aren't of the approved sharpness.  Frankly, I couldn't care less - I'd much rather you got on and wrote something with them....  OK so my analogy is getting a little out of hand and theres a depression setting in.  Alas, I'm poorly seated in my round hole I can't see who that could be, or even where.

As it stands, the technological future of the human race's World Three will be decided without me (and Starfleet, who are clearly obsessed with the cost of graphite and ink) - but concocted by the likes of Andrew Marr and his flappy arms.....  God help us all.


PS - Sorry Andrew, I know you're a bright spark really, but you do have flappy arms :-)
BBC I3 Internet News Starfleet Tech