Flash... Ah-ahhh. He saved everyone of us! To flash or not to flash that is the question.

Having read & watched this Dan Simmons piece about Andriod 2.2 on the HTC Desire and how it runs adobe flash, and I find myself considering jailbreaking my iPhone 4 just so that I can run flash too. I say, so that I can run flash, but actually even then I can't run the real live 100% cosher Adobe version of flash.

So what's going on and how are us mere mortals supposed to understand the pluses and minuses ?

Well, flash (in the form we're used to seeing) is a browser plugin that allows your web browser (Microsoft Internet Explorer, Firefox, Safari, Chrome, A.N.Other) to play animations and certain videos. For example in the UK the BBC uses the flash plugin to play it's video content. What this means for the iPad, iPhone and iPod Touch is that you simply can't watch flash video on these devices, because Apple won't allow the flash plugin on the mobile version of safari.  Apple have published their thoughts on flash for all the world to see and it explains why Apple don't allow it, but here's the conclusion that Steve Jobs draws from his article.


Flash was created during the PC era – for PCs and mice. Flash is a successful business for Adobe, and we can understand why they want to push it beyond PCs. But the mobile era is about low power devices, touch interfaces and open web standards – all areas where Flash falls short.

The avalanche of media outlets offering their content for Apple’s mobile devices demonstrates that Flash is no longer necessary to watch video or consume any kind of web content. And the 200,000 apps on Apple’s App Store proves that Flash isn’t necessary for tens of thousands of developers to create graphically rich applications, including games.

New open standards created in the mobile era, such as HTML5, will win on mobile devices (and PCs too). Perhaps Adobe should focus more on creating great HTML5 tools for the future, and less on criticizing Apple for leaving the past behind.

Not to be outdone or put down by this, Adobe wrote their own reply, entitled Freedom of Choice, and the shorthand summary:

We believe that Apple, by taking the opposite approach, has taken a step that could undermine this next chapter of the web — the chapter in which mobile devices outnumber computers, any individual can be a publisher, and content is accessed anywhere and at any time.

I'm actually with Mr Jobs on this one. HTML5 does a great job without the power hungry flash hassle and extortionate fee's involved for developers (The cheapest version "Flash Builder Standard" costs £163, "Flash Builder Premium" is £466, while "Flash Pro CS5" costs £653), but - and it's quite a big but - HTML5 is in it's infancy still. Most developers have not adopted it yet and so we still have a distance to go before it's a prevalent as flash is today.  I'm pretty sure that will still happen, but it's no instant fix.

In the meantime this means all the iApple device hackers are in their element trying to find new and interesting ways to make your iDevice play flash. Fun times.  Basically once you've applied a jailbreak to your device you can install all the stuff that Apple would rather you didn't.

Until recently the act of jail-breaking was illegal in the US, but there's been a change in the law and that means you can jailbreak without fear of reprisal. However, Apple still insist that jail-breaking invalidates your warranty - although this pre-supposes that they know you've done it, because it's just as easy to reverse the process should you ever want to. 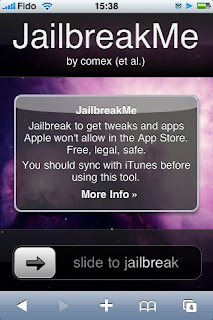 How do you it then? Turns out it's really easy to Jailbreak the handset unless you've installed today's firmware upgrade. You see, this is how it goes with Apple and the Dev team. These guys spend their lives in mortal combat of iOS security. It's great fun for us to watch. Every time the Dev team find a way around the Apple security, apple release a patch to block it, and the Dev team start searching for another way in. Todays update (iOS 4.0.2) has locked it all up again, but you can expect the dev team to have that sorted today or tomorrow probably.

So, that's the decision made for me. I'll just hang on until next time round I guess. If you haven't upgraded (from 4.0.1) and you still want to jailbreak, simply visit this site in the iPhone safari browser: http://www.jailbreakme.com/ and from here you simply follow the instructions.

Once you're jailbroken, then you use the Cydia app (installed as part of the jailbreak) to install "Frash". Navigate to Cydia on your Home screen, then tap on “Manage --> Sources”, then tap “Edit” followed by “Add”. Type http://repo.benm.at then tap “Add Source”. Finally search in this source for "Frash" and install from there.