on July 23, 2012
That was a fairly full on weekend and now I have to face a Monday and the pain of travelling into central London. I may well be complaining unnecessarily but given that Friday sees the opening ceremony of the London 2011 "O" word, I'm expecting it to be challenging at best.

Friday night saw me hopping the train with Stan off down to Bath. In my youth, I spent many a grand evening in that fine city and it's always a pleasure to visit. That said its also got very expensive of late. It's gained itself a reputation for being a posh city and I suppose it is (unless you know where to look), which makes it the most expensive hotel rooms in England (allegedly). As it was we were able to get a couple of rooms in a Travelodge for 90quid each - bearing in mind that Travelodge's are some of the cheapest accommodation in the country and are usually only about £45 a room. Not only that, but it's not a Travelodge of any "quality". Poorly maintained and generally looking a bit drab. At least it was centrally located.

By around 9pm AJ and JH had joined us and beverages were consumed. We did a very traditional pub crawl and finally gave into the need for some sort of sleep at around 3am. I know I'm starting to get too old for this stuff, but how many nights are you on the planet? And how many chances to have such a good laugh with your friends do you get? Gotta make the most of it. 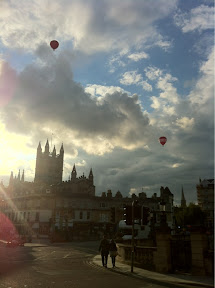 One stop of note was just down from "The Star" (sadly I know not the name of the place) which was a tiny little pub having a random Cornish themed evening. What makes it noteworthy was the liberal distribution of Cornish pasties and ice cream for anyone that was interested - and it seems that everyone in the pub was. Bizarre and very entertaining in one fell swoop.

Saturday morning, Stan and I met @LegOlympian and rode the train back to Gloucester with him. He regaled us with plans of his training routine, which you can see all about if you look. 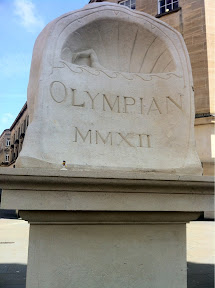 All good silly fun and with the sun out it seemed wholly appropriate for Mrs G, daughter and I to walk into town for dinner with Aunty S and the kids before she jets off on holiday.

As much as I'd tried to forget I was giving her a lift to the airport in the morning, it was unavoidable and when the alarm went of at 3am on Sunday, the lack of sleep was starting to tell. At least she wasn't late and daughter had decided she wanted to join me on our expedition to Birmingham and back. Aside from a stop off for a McDonalds breakfast (Which I suspect may have been daughters motive) the jaunt was quick and peaceful. Back in bed by 6am so tried to catch up with the lack of subconsciousness.

Sunday was Mrs G and I's wedding anniversary. We popped in on MotherInLaw and had some pick your own Strawberries while sitting in their garden and having a bit of a catch up. The weather was spectacular now that summer has finally arrived it seems and we had a reasonably relaxing day.
In the afternoon we took a stroll down to the docks to see the Gloucester Food Festival and unfortunately we were somewhat disappointed. Not that there was anything wrong with the food or drink or music or any of the multitude of stalls selling wares from here, there and everywhere. No, our problem was the crowd. There were so many people there that you couldn't actually see anything of any consequence. I'm sure the good weather had brought them all out and in places it was almost quite literally a bun fight.

We elected not to bother with it and instead wandered up to a very nice place in town to sit outside and enjoy some far less crowded (and I suspect more reasonably priced) lunch sat in the sunshine.

Back at home with blistered feet it was baked potatoes for dinner and Sister in Law had sent us a copy of our wedding video which made for some entertaining reminiscing especially as daughter claimed she'd never seen it. (A likely story).

By 10pm the call of sleep was overpowering especially with the knowledge that I had to be up at 6 to get the train down that Laandon and so here I am - battling through the throngs of commuters, tourists, athletes and journalists who have filled our capital city to capacity. 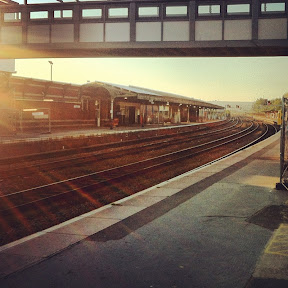 Once I get through today's workload the most important thing on this evenings list is sleep. Something that's most definitely been lacking.