You know, it actually couldn't possibly rain any more....

This year the UK has had some record breaking rainfall which has obviously been carefully timed to try and cause as much havoc with the Great summer of Great Britain - and that's been working. But we're not the only country to have had record breaking weather of late and in fact this very week, the US has been breaking heat wave records left, right and center. Apparently it's all very cleverly tied in with the jet stream which is one of the prevailing winds that constantly blow across the Atlantic Ocean from the New World towards the UK. We love to talk about the weather (probably because we're a relatively small island with so much variation in climate) but to be honest, I'm almost as bored of it as the "O" word now.

Of course, the "O" will be a fascinating spectacle and I'll be all over it once it starts up and gets going, but the build up is becoming a little draining for me now. The BBC will be providing 24 channels worth of it (although to be more factually correct, the OBS as the host broadcaster, have commissioned the BBC to provide much of the coverage that we'll see.) and not a lot of people know that. One things for certain, over the 17 days of the "O"s, don't expect to see anything else (or anyone else other than Gary Lineker) on BBC1. I must confess, that I am looking forward to the 100m finals in 3D though. 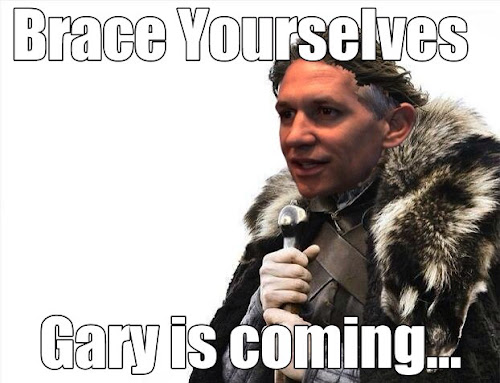 No WTC this week, because we had a little get together on Tuesday, the Juglar is away in sweaty hot Canadia and there are other shenanigans going on on Friday with the Wiltshire boys. I had a fairly lengthy conversation with one of them via standard telephone, Skype and then Facetime from his current locale (Washington DC). Skype's alright, but Facetime was clearly better and both of them completely outclassed the good old telephone call. Quite bizarre. One little tip for those of you with the technology. Using AirPlay to mirror the iPad (or iPhone4) FaceTime call via AppleTV onto my Big telly in the living room, meant we could have a room-to-room conference call - albeit with the passing of the iPad/iPhone around to see individuals - but it was very effective and made me realise just how far "teleconferencing" (for want of a better description) has come over the last 10 years. Server room sized systems with multibonded ISDN lines are rapidly becoming a thing of the past.

On the work front, it's a day full of conference calls covering various odds and sods. Tweaking of the behemoth toolset, status updates and most importantly a handover from the lads up that London. I suspect that will result in some travel up to the city next week. Not a good time to be going, with the "O" so close, but we'll see what happens. If nothing else, it'll be an interesting buzz. Pooh's still picking his way through the forest, but I think he's nearing a clearing and my monkey is at rest.

One last thing, for those of you wondering about the above meme. The original image is from "Game of Thrones" the HBO TV series based on the series of books by George R.R.Martin (the series of books are called "A song of Ice and Fire" and the first book is "Game of Thrones"). I'm not really massively into this sort of fantasy type stuff usually, but this particular series has been most entertaining and I'd recommend giving it a go. It's definetly for adults with some particularly dodgy moments in it, and I have heard it referred to as akin to watching Babestation with the sound muted while listening to the soundtrack from "Lord of the Rings" :-) Draw your own conclusions...

Until next time - Tyrion: As impossible as it seems, there was once a time I was unaccustomed to wine.