As I'm overdue a blog entry and long overdue a film review, here's some waffle on the subject....

1971 saw Sam Peckinpah's extraordinary and shocking work Straw Dogs - starring Dustin Hoffman, arrive in cinemas. It was given a hard time by most critics, not least because of its deeply disturbing rape scenes which the casual observer would have found uncomfortable at best and unwatchable at worst. For many, its reputation alone will have excluded it from viewing lists, so I wouldn't be at all surprised if you'd missed it. It's based on the English novel "The Siege of Trencher's Farm" by Gordon Williams, which interestingly doesn't contain the rape scene at all.

I'm a bit of a fan of 70's movies, and I like Dustin Hoffman, who was particularly good during that decade - so I have seen it. It's set in Cornwall, England and is basically the story of a fairly well-to-do couple who move into a remote-ish farmhouse (the wife's former hometown) with a crowd of "locals" who are firmly of the opinion that "There's nothing for you here" and so on... The well to do couple, try to understand the locals, but the locals are having none of it. The weedy "Hoffman" husband fails miserably to protect his wife from the bullying (which is far to soft a word for them) locals - and they attack and assault her. This is the straw (no pun intended) that brakes him and he explodes into a fury to attempt to make good on his weakness. Incidentally the title comes from a reference to Chinese ceremonial "Straw Dogs" which are said to represent "forms without substance"

Hoffman does a great job in the role and its a movie which while tough to stomach in places is well worth a watch. After its initial problems - the film was heavily linked to suggestion that cinema caused violence not helped by being released the same year as "A Clockwork Orange" - it has gone on to gain something of a cult status and is often referred to as Peckinpah's best film. I'd suggest you judge for yourself....

So with such a distasteful pedigree, why you may ask, would anyone ever think of considering a remake? 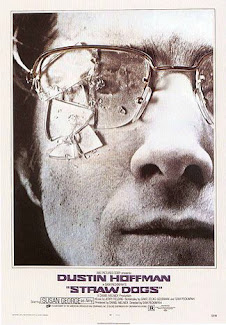 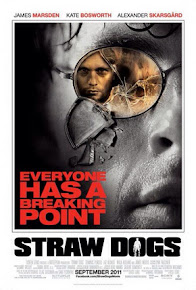 Well, aside from money, there is a story of guts and determination, of the underdog and of the good guy turned bad. So is the remake which of course is also called Straw Dogs, a) worth it and b) any good?

Short answer, in my opinion is yes and yes. You'll probably enjoy it more if you haven't seen the original, but as remakes go, it's not half bad. It follows the original film - not so much the book - with the only major change being location (namely the US Deep South, as opposed to the UK Deep South I suppose) and a couple of character roles - from Mathematician to Screenwriter. Well come on, if you were a screenwriter you'd always want the hero of your piece to be a screenwriter too... Probably. :-)

It's a "cleaner" version of the original, but still a powerful story. Still uncomfortable in places, though somewhat sanitised - which may be more to do with censors and ratings and audiences than directorial choices - it can still deliver a psychological punch that helps you understand the weaknesses of the lead character.

In a way I prefer it to the original, because of its polished finish, but the original feels more believable. Once again you really should judge for yourself. Both films are available on DVD.