Yet again I find myself eastbound to that Laandan on the early train. But hang about... What's this? It's Tuesday! What happened to Monday? In fact what happened to all of last week? And what was that about phones? And golf? (really this blog is becoming ridiculous... I mean, it's late, it runs teasers to stories that never appear. I'm actually considering leaving and setting up on my own - Ed)

Alright, alright.... Last Monday.... (Wibbly wobbly - back in time special effect - wibbly wobbly)... Same old same old, back down to the city for another week of trying to get the numbers together and write something believable to help out our forlorn customer and our totally knackered team. This particular deal has been a very long slog so far, and it's not over by quite a long way, so everyone involved is aware that the a lot more of this to come still. The stoke chef is bearing up under the strain of it all, and is doing a remarkably sound job. However, next week he has approvals, and with personal experience I'm aware of how stressful that can be. I think the best advice (certainly the most unhelpful) I ever got in such a situation, was from the badman and it went something along the lines of "It'll be alright"... As it turns out, even if this is of little comfort at the time, it is generally true... Unless you're about to get eaten by a lion, or crash the goddam plane into the mountain.... Rarely is that "alright"

Outside of the actual work, Monday night saw the stoke chef, me and a few other lads take a wander over primrose hill to an Italian place near the Queens.... I had a pizza. It was hot. I had some wine. I was glad of the walk home because I was stuffed. All in all very nice. Can't for the life of me remember the name of the place, but I'm sure ill go back.

Tuesday, was something a bit more adventurous, in that we tried somewhere we've never been before. This time is was, the tall fella, the stoke chef, me and Neil (who I could come up with an interesting name for, but unlike the rest of the world, I'm generally nice to ginger's :-) ) This time it was a new-ish place on Marylebone lane called "28-50" which describes itself as a wine workshop and kitchen. Bit of a poncy premise, but actually very nice. The only thing they seemed to get wrong was the chips - oh and watch out for ordering side dishes separately (which seems to be becoming the new norm). Catches you out when the bill arrives though. 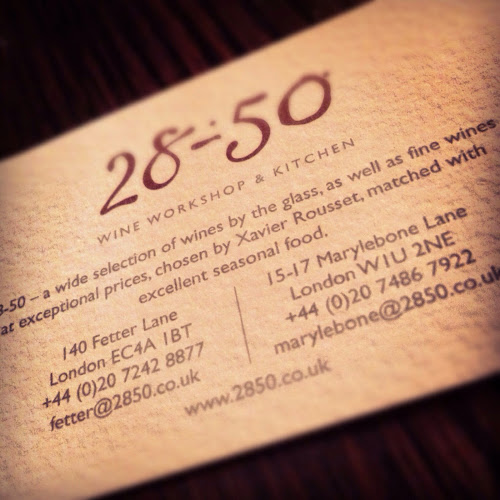 Post food, we had a pint in the pub around the corner (the cock and lion - how rude, naming a pub after such a majestic beast.... What?) and then on the corner (the running horse) - although I should add that this wasn't the same corner.

Wednesday and the hours are starting to bite. the other team in the office have all come down with a bout of man flu (even the woman of their team) and they resolve to kill it dead by going for a curry. I tag along with the stoke chef, because I haven't had a curry in ages and because if I'm going to catch this cold, I might as well launch a pre-emptive strike against it. The Curry Manjill - on England's Lane, near Primrose Hill, provided an excellent bit of nosh and a couple of pints of Cobra to wash it down with.

Back in the office, the pressure is on for us to get the numbers complete but that is proving to be a challenge. Part of the problem is the shear number of people involved in this one. They also come from two opposite sides of the business, so while we are all one team, there is a bit of them and us going on, and allocated budgets do cause a bit of a punch up - especially when it's quarter four, and there are targets to be met.

The pressure is causing me another problem though. I need to be back home on Thursday (preferably early) because Scottish uncle Dave will be there, with Aunty L and the kids, to celebrate his birthday. Eventually I get away a couple of hours later than planned, and make it back to the West Country at a reasonably sensible time.

Dinner - and as is customary, as its his birthday, Scottish Uncle Dave gets to choose what he would like.... He chose curry... And as I haven't had one in ages... Oh, hang about. Ah well. It was fine, but I'm off the curry for a while now. A good time was had and a birthday was well celebrated. The kids even enjoyed a bit of a 3D fest with Tintin on the big telly.

Friday saw the Scottish clan take a trip out to Bristol, Mrs G off to work and I was left to the peace and quiet of the house to get my head down and finish collating costs. With this out of the way, there was the general admin of travel to get done, along with preparation for next week - another hotel, another train and so on and so forth. And finally the weekend is in sight.

The Scottish contingent returned from their trip and we gin and tonic'd our way through the evening. All in all, a long but achieving week - even if there's still work to be done.

Now, you may ask... What of telephones and golf? Ah yes. Good point, well made. Honestly, I will get to that in the next one. It's just for now I have another distraction to deal with... And it's not a pretty one. It's all about a Tuesday in Swindon....