Monday churned. Goalposts didn't move dramatically, but we were a man down and that way lies hard work..... The lead - MrH - isn't a well bunny and has the flu that's knocking out people left right and center. As result there's few of us left to try and get things sorted. He's in a difficult position, between a rock and a soft place and there's sh1t to get done.

I already knew we had to get "War and Peace" completed by Friday to be in front of the customer, I just hadn't realised that it was going to be down to me to get it done while everyone else swanned off to drink tea and eat biscuits with said customer elsewhere in the city. Not only that, but the other deal is also in need of some attention because basically no-one else can be arsed to do the menial and yet essential tasks required to get the job done. It's times like these that it feels like I shouldn't bloody bother and I should just retire with my secret lottery winnings - I mean its not like I need the money or anything. (What am I reading here? Clearly a work of fiction, and not a very good one at that - ed)

Monday night saw the tall one go off to his hotel (over tired), while the chef and a few other colleagues and I went to "The Queens" near Primrose Hill for a couple of pints and some dinner. And very good it was too. Some quality pub grub. I don't like the term gastropub, but I can see what they mean. I had the fish and chips, which sounds far more lowbrow than it was. After all it had "crushed peas" as opposed to mushy ones....

Tuesday had nothing of note during the day aside from the usual slog. There was writing, copying, pasting and more writing. The evening held a bit of a treat though. The tall one, the chef and I headed off north to Exmouth Market in search of interesting food and drink and found "Moro" and next door "Morito" (as in "little Moro"). What a find. The logic applied here, is if you're taking your mum out for a poshed up family type dinner, you go to Moro's, whereas if you're looking for more of a cafe, afterwork, or first date style joint, got to Morito's. 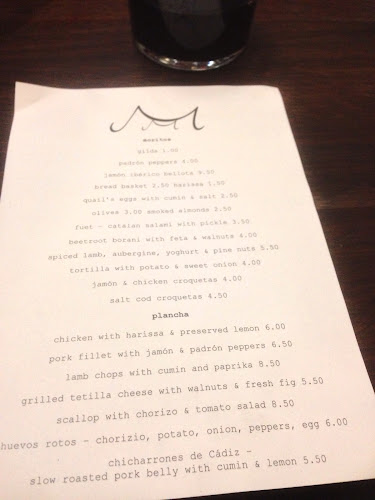 It was very busy, so we had a word and the lovely woman behind the counter said she'd give us a ring as soon as a table was available. During the wait we headed over to the Exmouth Inn (or arms, I can't recall right now) for some most enjoyable beer from their very extensive beer menu. They have a particular beer thats about 15 quid for a pint - needless to say, we declined, but what we did have was excellent. 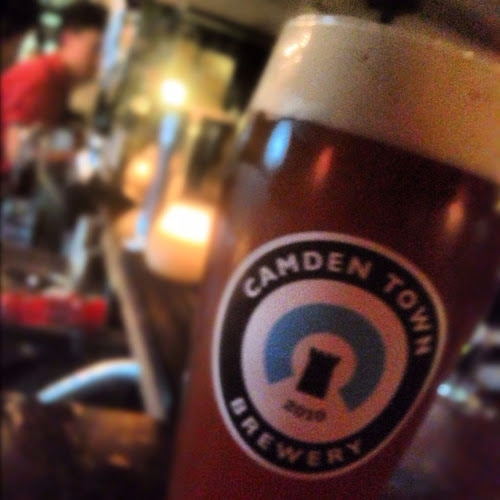 Two pints later and back to Morito's. Think Spanish tapas dishes, with North African influences and whatever else the chef feels like adding to it. We had 9 different dishes and two bottles of wine all for 30quid each. This isn't exactly cheap, but for the quality of the food, it's most definitely not expensive. Highly recommended. 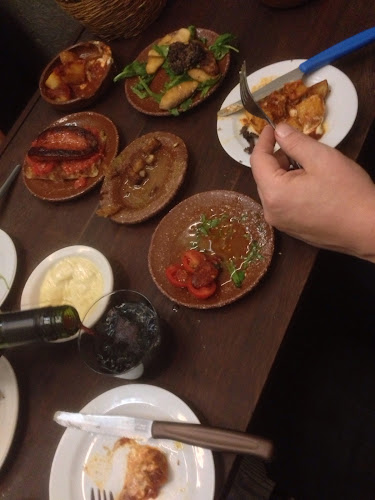 Wednesday evening ended up being a Chinese round the corner from the office. I won't be going back. It was just a very unappetising meal even if the company - which included about 8 of us - was wide and varied.

By Thursday night and the journey home, "War and Peace" was about 90% complete and I was confident, even with the last minute additions caused by the client meeting that day, that I'd have it in good shape ready to be sent off to them on Friday. Thursday night proper was a trip to the Whittle to celebrate Rod's retirement. A few beers and reasonable grub provided by J (his boss) was extraordinarily enjoyable and would have been more so if it wasn't for the fact that I was pretty much dead on my feet and conscious of the looming deadline. I battled on, and still managed to enjoy the banter nonetheless.

Friday was an early start to finish the beast, and by lunchtime it was done and off to review by those that have to do so. A few tweaks, a couple of comments, turn it into a PDF and by 5pm all is over and it feels like a job well done. No doubt the customer will barf all over it, and we'll have to write something new and probably longer. To me, it's 300 pages of useful guff.

Next thing I know, it's the weekend! Yay! Friday night, Mrs G and I enjoyed some well deserved wine with our perfectly cooked Gammon steak (I do like overly large Bacon - for that is what it is). I also noted the arrival of Adele singing the new James Bond theme - Skyfall. Those of you that know, will know I'm a bit of a fan of the bond films, and I'm greatly looking forward to the arrival of the next outing. If things go to plan, I might even be able to catch the IMAX version of it - October the 26th in the UK I think. A cracking way to celebrate 50 years of a well worn cinematic franchise.

Saturday morning saw a whole host of jobs that have to get done before next weekend - when we jet off to the sun for a bit of late winter vitamin D. Daughter made an appearance, which always brightens even the brightest of days. She has bough more fish. We also had Auntie S and the kids round for an evening of Pizza, frivolity and dumb telly.

Sunday, in-laws for lunch. They're pretty chewy, but have a great flavour (the old ones are always the best - see what I did there?). Son appeared and regaled us with stories of him not ducking quite quickly enough in a club in the West Midlands - not a fun story but he's perfectly alright and we printed tickets and assembled paperwork in preparation for the trip. Then there was railway tickets and hotels to organise for this coming week. Bags to pack and suitcases to extract from the loft. Playlists to organise and booklists to load up the kindles with.

Finally on Sunday night I sat down and relaxed for only the second time this weekend and promptly fell asleep on the sofa.

6.45 Monday morning and I'm back on the train for another week of fun in the city. This week is all about numbers - and I'll be reinforcing the fact that if I don't bloody well do them, no one else will, even though without them nothing will happen. Frustrating at best. Still, the tall one, the chef and I will hunt out some diverse digestion destinations I'm sure, so thank god for small mercies.