2013 is more ominous, but then that's because I have a minor tridecaphobia (sp?) and although that's really about Friday the 13th, it's just 13 in general. The correct approach is to embrace the fear of 13 and just bloody well get on with it, and stop worrying about something that isn't happening.

As it happens, the end of 2012 is actually causing me no end of grief. The weather is just hampering everything, I've been feeling generally rough and worn out (although that may have something to do with over consuming and under exercising), and now I need a plumber.

These things always happen at the worst possible time - generally during or just before a bank holiday, just so that the call out fees can skyrocket. We have a sealed hot water and heating system which has been running just fine for the past 6 years without a hitch. Part of the system includes an expansion tank to allow for water expansion as it heats up. This is a sturdy tank that's mounted on the wall of the airing cupboard using a metal strap with a jubilee clip.

Last night for no apparent reason, the metal strap decided to just snap. I can't see a reason for it, it's a piece of stainless steel that just decided it had had enough of holding up the expansion tank, so it just gave way. This led to the tank falling about 4 inches toward the upper shelf in the cupboard, so in theory should have cause little or no damage en-route. However, on its short downward journey, it met up with the return pipe from the pressurised vessel that feeds the boiler. It gave this pipe a hefty wallop and split the joint, thus creating a leak for the pressurised take to empty through (at some speed) into the airing cupboard.

The pressurised tank has its own separate filler feed, so is easily isolated, but it does of course render the heating and hot water system inoperable. This leaves us with no hot water and extra jumpers until the plumber can come and fix it on Thursday. Impressed, I am not. Cold, I am. A great start to the new year.

Ordinarily on the 1st, Mrs G and I partake of some outdoor sport in the form of Cheltenham races. This year however, that's also going down the swanny river thanks to the weather. Rain has waterlogged the course, so it's looking like its not going to happen. On the plus side I suppose this is some deity's way of telling me I can't afford it, not least because I have to pay for a plumber instead.

Haven't done much in the way of traditional Christmas telly in the last week. Pretty much avoided most of it, but we did make a point of watching the queen's speech in 3D on Christmas Day. To be fair, it was the novelty factor of having her maj stood in the living room as much as anything else. I still think 3D is a gimmick, and more likely just a stepping stone on the way to 4KTV or 8K for the UK (knowing how long it takes for licences for such things to get approved in this country) 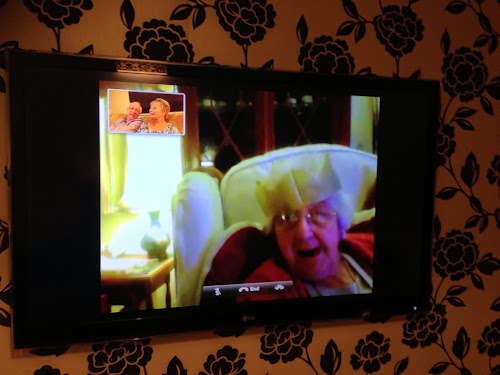 Not the Queen in 3D
We do have that crime caper thing with Stephen Fry still to watch, and we recorded Doctor Who, so I might bother with that, but for me there have only been two doctor's though - Tom Baker and his awesome scarf and Christopher Ecclestone who reinvigorated the whole thing a couple of years back.

A different story on the movie front however. Managed to consume Prometheus, Avatar, The Dark Knight Rises, all three Back to the Future movies (back to back), White Christmas, Holiday Inn, American Gangster and way back in 1990, Narrow Margin. Still on the list to do - Ted. As the races are off, (and someone has a birthday coming up) I might try and persuade Mrs G (who really isn't a fan of cinemas) to spend an evening in the screening rooms (http://www.thescreeningrooms.co.uk/) to catch something on the bigger screen. Probably not the Hobbit though... TL;DW

Next week is likely to se me travelling back up to London on the work front - but in the words of the late great Gerry Anderson "Anything can happen in the next half hour".

Anyway, here's hoping that whatever you do, you have a good one and that any injuries you've sustained over the Christmas period make a rapid disappearance.