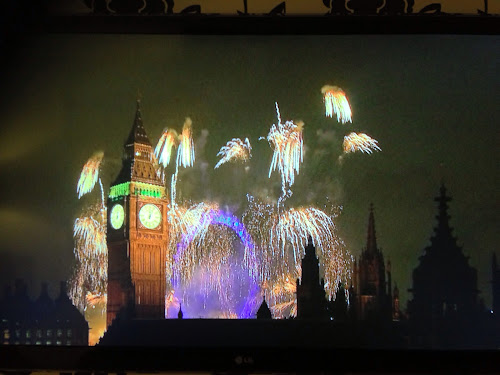 I'm seriously going to put in an effort to write something a bit more regularly this year. How's that for a New Years Resolution? Of course calling it a New Years Resolution means that I'll keep it up forms few days and then it's right back in the trash and all forgotten about. But we'll see... At least I'm trying.

One thing about having no heating or hot water in the middle of winter is just how cold it is. Even with multiple layers its amazing just how soft central heating makes you. I've endured much harsher hardships in the past, so a couple of days of this shouldn't be impossible - and we're blessed with excellent insulation so it's not all bad - all the same, it's bloody cold.

Last nights celebrations were the quietest we've ever done and actually it made for a very refreshing change. Mrs G and I did nothing. Well, when I say nothing, I mean we didnt party. We stayed in, had a bottle of wine, some nice steak, the telly box and some chocolates. New Years Eve telly seems to be mostly rubbish though. We watched the fireworks up that Laandan at midnight - which as always seemed to be pretty spectacular - but other than that, all very peaceful.

Son has tootled off to Chesterfield with his girlfriend (who is quite lovely) - so its best not to ask in too much detail what theyre up to. His mother would surly not approve :-). Daughter, on the other hand, was working last night - the crazy fool - but she had decided as the races are definetly off, to go out after wards with a few friends and join in the festivities. Hopefully she had fun, but haven't heard from her yet today. Among other things she bumped into a plumber friend of hers yesterday who said he'd be happy to come and look at our heating today (New Years Day). This puts us in a very typically British quandary, where we have a plumber arranged for Thursday (the earliest he could make) and now we have another offering to come in today. Naturally our Britishness means we don't want to offend the original plumber, but we do want if fixed ASAP.... Personally, I said its just tough for the original guy. If he'd been available, he'd have got the job. Let him down gently and there's no problem. Having said all that, Daughters friend, may or may not show up - what with it being New Years Day and all.... Lets wait and see.

Today's plan is for a bit of a New Year walk. Of course this kind of depends on when/if the plumber arrives and we may end up not walking as far as we've got in mind. The suggestion is to walk to a pub the other side of the city for some lunch/early dinner. It's a good 3 or 4 miles around the edge and out across the flood plain. Given the rains we've been having it could make for some quite interesting scenery - unless there's been a very rapid recinding of the water levels. The maybe photos later (film at 11 - as the US News networks used to say).

Those of you that have been paying attention will also know that I've dumped Instagram completely now. It's all a bit sad, because it was a service I'd enjoyed being a place to share photo's quickly and easily. The trouble with it though, is Facebook. Since Zuckerberg bought them last year for an insane $1bn I've been a little nervous of it, and then in December they announced a change to their terms of service meaning that from January the 16th, unless you shut down your account, they can sell YOUR photos to whomever they please. Of course they're perfectly at liberty to change their service and I'm sure there are plenty of people who's attitude to this will be along the lines of "I only post pictures of food/my cat/dog weather, so who cares". Personally I think there's more of a principal at stake. I'm sure th are plenty of users of the service that haven't seen the change and are unaware that they're now providing content to a marketing machine that won't employee professional photographers for marketing shoots in the future. Furthermore, if you do happen to capture a magical moment, you'll never get anything for it, while someone else might.... And copyright of an image, should really sit with the creator of it.... But that's a whole other story...

So while Mr Zuckerberg is perfectly at liberty to change the T&Cs of the Instagram service, I'm perfectly at liberty not to use it anymore. Anyway - the long and the short of it is I've closed my account. There's a couple of tools about that'll help you download your photos should you need to, it's all very straightforward, and I've started using "EyeEm" instead.