Monday found me back on the train up that Laandan yet again. This time for a Monday morning kickoff meeting that involves lots of people sitting around and talking about the "plan" and how to get there.  It's all very interesting if you like that kind of thing - and for the most part, I do - although there's plenty of bits that I don't too.

We have some tight deadlines and lots to deliver so I'm likely to go a bit quiet on here while that's all happening.  This also means we tend to pull together as a team, which is always good for moral and makes it feel like we're all in it together, even if we aren't.

Monday night was a particularly late one and we settled on the "Mad Hatter" for a rushed dinner consisting of a pint and pie and chips. It appears that this was a bad idea on my part. Something really didn't agree with me and the pie kept me awake for most of the night - leaving me feeling particularly grumpy and off target on Tuesday. 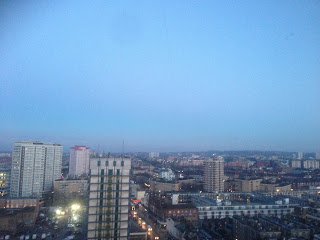 Bland view from the Hilton Metropole in the early AM

Tuesday morning was full of busy-ness, writing up stuff from the previous day and getting our ducks in a row to move things forward in line with the plan.  All good business speak and mostly boring stuff.  I spent a little bit of time with our cost model jockey, and once again didn't manage to leave the office until almost 8pm.  This was in direct contradiction of the plan, which was to try and grab a decent bite to eat and a beer to celebrate the tall bloke's birthday.

His restaurant of choice was to be "MeatLiquor", but you've got to get there early - and of course we didn't.  Second place choice went to a little French bistro ("Cote")just off of St.Christopher's place - which as it turns out was very good and much enjoyed by all involved.  Not being keen to eat much - in fear of a further sleepless night - I had the cod-goujons (posh fish fingers) and they were just gentle enough.

Wednesday was another early start and a day full of disasters.  There was a helicopter crash just round the corner from the office which caused a certain amount of consternation and no end of travel disruption. Mrs G had a puncture, the weather forecast contain dire warnings of snow and my return journey back to the country-shire was agonising.

It all worked out in the end though - and I made it home ready to set out again for the middle of the country on Thursday.  Of course - with a puncture and no chance of a repair before I had to be up North, I needed another form of transport, and Daughter was most helpful by lending me her car for the journey. Bit of an organisational nightmare - having to inflate and drive, borrow and drive and then inflate and drive again upon my return, but once again it all worked out and Friday was to be a day of working from home thus giving me the opportunity to nip out to a local garage and get everything fixed.  In the meantime there was an outing of the WTC - and a good time was had.

The weather hampered Friday somewhat with a huge dump of snow overnight - so the shovel had to come out and help clear the car before I could get it sorted - but the garage were excellent and charged me the princely sum of nothing at all to remove the nail (for that is what it was) and patch the resulting hole.

Finally the weekend arrived - and the snow was there to be enjoyed. Mrs G, Daughter and I took some of the fresh air and ice and had a mooch about town. I finally got my BluRay drive plugged in - more on that when I get enough time to play with it properly - and a slap up supper of Baked Camembert (thanks to my wife's excellent Xmas present of a Camembert baker) and a deeply warming chilli. 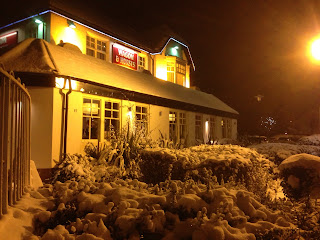 Sunday saw a few household chores and another venture out into the snow. The forecast has more to follow - starting on Monday - when I have to travel back up North for my annual review, before heading back down town again for a couple of days. Such fun there never was.

Am I enjoying it?  Not really.  Luckily, Mrs G & The WTC keep me sane - and assuming the review goes well - things could be a lot worse.

Stay warm and away from the ice - until next time...