First of all, quick note on the subject of dining out in the city. This week saw the tall fella, the church seating, the thinking woman's DLT (the smooth talking smooth person) and I take on two new venues that were previously untested. (They know who they are).

The first was "The Dovetail", a cracking little Belgian pub just off of Jerusalem passage, near Farringdon station. Authentic Belgian beers, authentic Belgian furniture and even an authentic Belgian Menu - well the Moules Frites - all of which were truly excellent and very good value. To be fair I had the Bison burger - so perhaps not quite as authentic as the Bison may not be a native of Belgium, but regardless - great food all round and worth hunting down. 8/10 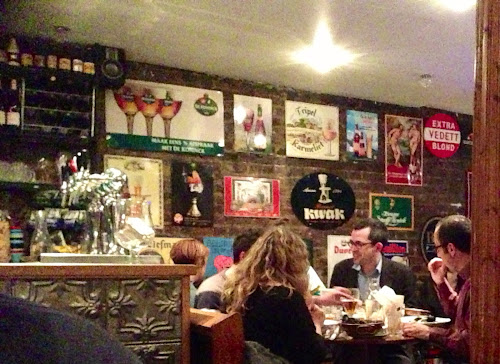 The second was a little more off the wall. There's a restaurant called "Meat Liquor" famed for its burgers that we tried to visit a week or two ago. However, it is extremely popular and as such, constantly has a queue stretching around the block unless you get there early. Anyway, having given up on it thanks to its popularity and our inability to finish before 7pm we hunted down another venue within the same very small chain. This one is called "Meat Market" - see what they did there? and is situated just next to Covent Garden.

If you're familiar with the area, you'll know that Jubilee Market is situated between the Strand and Covent Garden Market. Upstairs (above Jubilee Market) is where you'll find the place. To be honest, it took a bit of finding for us - mostly because we didn't know where it was, but to be fair - it's up a windy staircase and from the outside doesn't look like much of anything.

Now I think of it, it doesn't look like much of anything from he inside either, but don't let that put you off. It put me in mind of a transport cafe - a bit grubby maybe - a bit noisy - almost pop-up, but actually more pop-culture. Dirty Burgers is what you get and damn good they are too. There's also a selection of other meaty based meals and I'd say its worth trying out the Chilli Cheesey Chips which are actually a lot more than just the bag of chips you get as standard. Drinks are served "in the can" (that's neither the restroom, toilet or bathroom for our American readers) with a plastic cup should you deem yourself posh enough to decant. 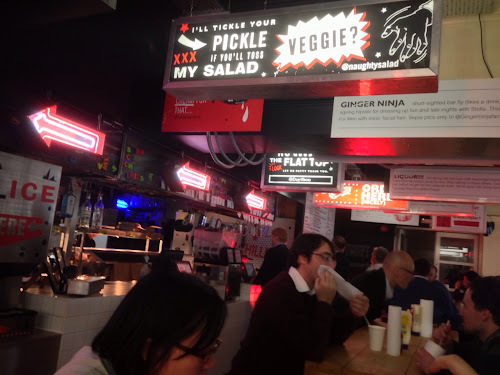 For a fun completely unstuffy and probably unhealthy if hearty dining experience - you can't want for anything more. This has just spurred me on to have another go at getting into "Meat Liquor" in the future. I'm sure it's worth the wait.

Now - the reason I was up here this week....On one level this job is going very well, however, on another, I do have days when I wonder if its really worth the effort.

As a team we've faced some pretty horrendous hurdles and clearly the biggest one of those is helping our colleagues understand that what we're doing isn't what we normally do. There are some elements of normality, but for the most part we're doing something new, unusual, and uncomfortable for those that are used to "the way of things" being somewhat different. This fundamental change means that we spend time having to describe what we're doing when usually there is a kind of short hand that everyone "gets" and so they just get on with it. Worse still is when some of the more senior members of the team don't get it - and being senior may not be interested in doing so - or may use their own internal shorthand to completely misunderstand what it is that we're doing.

Of course these hurdles aren't enough for the likes of us - we need to make it really difficult for ourselves by not having enough people to do it, or that understand it, or even allowing ourselves enough time to work on it. Better yet, a document management system that would put the unindexed section of the forgotten wing of the Bodlean library to shame, makes cross referencing and clear responses very nearly impossible.

The only other thing we could do is set some unachievable targets.... So lets do that too.

Ah well - it could be worse and so I shall complain no more. It's good to have a challenge and this is certainly one of those.

Tomorrow will see me doing something completely different. The bear of little brain and I will be going off on an adventure to help the little people of Birmingham. I'm sure ill find time to tell you all about it when it's done.