Enough!.. Headphones in, TV or Movie or book of choice... Onwards.

I suppose it's appropriate that Groundhog Day is coming up, because I very much appear to be caught up in the plot of the film of the same name. Once again, Monday was spent on the A46 and occupying various administration buildings, and Tuesday finds me on the train to our Capitol city again. So what have we missed?

Nothing huge of note to mention, but the basic run of the last week was as follows (for diaristic purposes). After Monday in Warwick, and the train in the wee small hours of the morning, Tuesday evening saw the tall fella, the church seating and I cross the bridge to "The Black Friar" and a meet with the tall fella's daughter and her BF. She too, is tall and very pleasant. He's a proud dad and future son-in-law ("He's got to get through me first" said the tall fella) was suitably both nervous and trying to impress, although I gather they've been "friends" for a good few months. We dined at the nearby Hare and Tortoise, Chinese and a couple of notches up from Waggamama's IMHO.

7am and back on the tube from the Hilton Metropole to the office for another frustrating day of trying to fold a perfectly formed origami flapping swan, and instead having to fit tab A into slot B. Honestly, this job feels just like that sometimes.

The Wednesday night journey home meant I walked in the back door at 9.30pm, dead on my feet but very glad to see Mrs G. Thursday was another early start, more paper construction failures and a dash back across country literally just in time for the WTC meet up (mentioned elsewhere I'm sure) 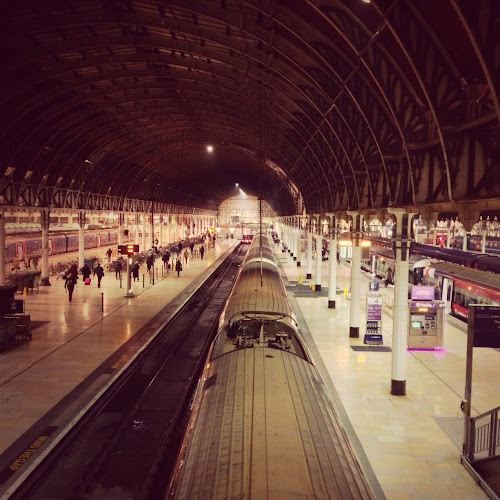 So, in summary, I only spent two days up that Laandan, with a return journey on Wednesday and a further trip across country to Warwick on the Thursday and a blessed day of WaH on Friday. (WaH, being Working at Home - or for some Telecommuting - eg: Feet up at home in front of the Telly). Sadly for me, it was the former and not the latter.

When the weekend finally arrived, I tried to persuade Mrs G to do as little as possible - always a struggle - she likes to keep busy, but we managed a good 5 mile walk to sort out the kitchen flooring - never buy anything from SCS in my experience - and acquire some new crockery. Sunday allowed me to clear out the garage (again). Odd isn't it? I did it a little while ago, but it seems that an empty space is there to be filled. On the plus side, having cleared it, I feel like I've accomplished something, which is more than can be said for the way work is of late.

Fish pie for Sunday dinner and the kids came and joined us. Having seen them both fly the nest, it's particularly enjoyable to have them back occasionally and catch up on all their comings and goings. Interestingly, son has announced he's throwing in his job and going travelling. Not just yet, but around September time most likely. I think he's been inspired by daughters travels of Asia, and the fact that working in insurance is really pretty bloody dull. To accomplish his goal however, he wants o save up some extra cash, and was "just laying it out there"... But wondered if he'd be able to move back in for a while.

Of course he can - you can't say no to your kids - and Mrs G is particularly thrilled, although, she'd never say so, but he is her first born, and she's missed him. It'll be good to have him around for a while. He's good entertainment. Negotiating the rent was great fun. :-)

For those of you on the edge of your seat waiting for my "How to Rip Blu-Rays for an Apple TV / iDevice" post, fear not, it's coming soon and you'll be glad to know I've worked the kinks out of the process - it's a doddle, but in the meantime, I'm sure you can tell what I'm watching on the train: