...I just wish I didn't have to sometimes. This occasion is one of those. This week it's my Birthday - which is nice, but instead of spending it with the beloved Mrs G, I'm having to commute back up to that Laandan (innit) for three days of banging my head against any nearby solid surface. At least that's the impression of the situation that I'm getting from the tall fella. On the plus side, there's an opportunity to dine out at the now world famous Morito's (or something similar) at someone else's expense - something not to be sniffed at.

Wednesday is going to be spent in the office, while on Thursday and Friday I'll be visiting the clients offices. While this is not a routine I want to get into, on this occasion, it will be particularly interesting for me, as its just over the road from where I used to have a flat in London - over Victoria way. I say "I had a flat", It was a company flat and served as my base for six months in between hotels. It was a time that I greatly enjoyed, even if it did seriously screw with my social life in the west country. Having said that my social life in the city was second to none - albeit a bit pricey. Good times were had - especially for a single bloke with money in his pocket, and nothing to do but get into trouble. Ah well, may the best of my past, be the worst of my future.

I digress. I really have to hand it to Mrs G. I'd be utterly lost without her. She is my everything. I'm not saying she was overjoyed, but she was willing to get up before any right and proper person would this morning, and give me a lift to the station. It's not fair on either of us, but I am exceptionally lucky that she is so understanding and selfless - I knew there was a reason I married her - and it's not just for lifts to the station. ;-)

All of this means that, once again I'm sat on the stupid-o'clock to Paddington with a bunch of people who are trying to get back to sleep as we trundle through the West Country in darkness toward the big smoke. It's early enough - and the middle of the week enough - that the train is practically empty, and for the first time in ages my seat reservation requesting a table has actually been fulfilled.

I'm in a carriage with those little TV sets in the back of the seats, which is about as up to the minute tech as it gets on a First Great Western - yes there's still no WiFi, which is, after all why we pay 150 quid!! Those of you that have been paying attention will know that even my local bus in the sticks, has free WiFi now (yes - Bus) and yet FGW are quite happy to keep putting up rail fares, saying they're going to do this and that, and apparently doing nothing at all. In the mean time, the minister for rail fares is quite happy to take a chauffeur driven taxpayer funded limo to work everyday rather than hop the train with the rest of us "plebs"... And I use that word in the "taxpayer" kind of way that MP's like to think of it. Don't get me started - although I fear it may be too late!

Back at home, the heating is fixed. 120 quid secured the services of a plumber for a couple of hours and the replacement of a pump which unbeknownst to me seemed to be failing. I'm not sure that this was in anyway related to the expansion tank falling off the wall (which was the original problem) so it's entirely possible that I'm getting fleeced - however, everything does appear to be working correctly now - and that old pump definitely looks like its been struggling. If there's one thing that I'm not, its a plumber. Benefit of the doubt.

The WTC 52 Pub challenge is back from the dead - but being in London, I'm going to miss week two. Still, we'll cope and it just means that next week will be that much more enjoyable. Might even try and suggest to the lads, a crafty beverage at the weekend to make up for it, but I have to bear in mind that we're having a bit of a birthday bash lunch on Saturday with inlaws and outlaws... So little to do and so much time... Oh, no... Strike that. ;-) 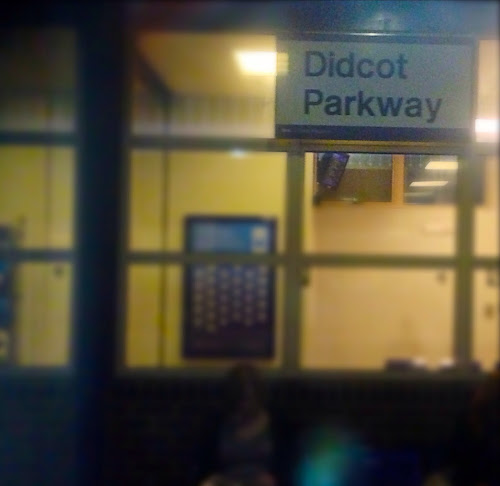 There goes Didcot Parkway in the dark, and next stop is Reading (for our American cousins, yes, it is pronounced Red-Ding) which at this time of year and day will be in the almost light, but not quite. The train is filling up with commuters of all shapes and sizes now. There's still a few trying to sleep, but as daylight appears through the mist they're starting to stir and get restless. Clearly anxious for the day ahead - exactly like transporting cattle isn't it? Reading station is a right old mess at the moment too. They're doing something to it, which will no doubt make it more appealing to the commuters of reading while just annoying the crap out of everyone else. I'm sure it'll look nice, and FGW will use it as their excuse for putting up ticket prices. Not that I'm cynical or anything ;-)

Right - time I was out of here...although I'd rather still be tucked up in bed. Adieu.