Daylight on The Orient Express

OK, so it's no the Orient Express, it's the 6.46 to London, only it's not even that today. Oh no. Today it's the 6.46 to Swindon owing to the fact that an "earlier train" had caused a delay. "Please accept my apologies" said the train manager "but due to problems yesterday, we decided not to run this train past Swindon"... Marvellous. As a result its overcrowded, and generally not a lot of fun. I appear to be sat next to a someone who clearly wants me to know that he has a meeting in Liverpool street today. I feign interest. I should consider changing today's title. This train is not going to the Orient and it's not an Express. In fact the only accuracy in it is the Daylight.

It's now officially British Summer Time and the clocks leapt forward an hour on Sunday morning. I'd forgotten what it was like to wake up to daylight. Heavenly. Feels like there's more hours in the day - something that I'm going to be needing in the next four weeks with so little to do and so much time - in the words of Mr Wonka.

Thursday night saw me joining the WTC for a beverage and some music, which I'm sure is documented elsewhere...

Friday as well as being a bank holiday, was daughter's birthday. We celebrated with tea and cake and that - and then in the early evening trundled off to Gloucester to see "The mighty Glaws" (that's the Rugby team) play Harlequins at Kingsholm. What a cracking game it was too. Gloucester had been licking their wounds after a particularly nasty defeat to someone (remaining nameless) lower down the table last week, and the 'Quins are currently sat at the top of the table - so the outlook wasn't rosey. The first half did nothing to make us feel this was going to be any different. That's not to say there weren't some great moments of defence - but the scoring on the Cherry and Reds end wasn't happening. All changed in the second half though - and in the end - with some furious cheering from "The Shed", Gloucester romped home (17-15) with massive appreciation from the crowd. Without doubt, one of the best games I've seen in a long while, and completely fitting for daughters birthday. She was chuffed.

We wandered into Teagues bar for a celebratory beverage - well, we squeezed into Teagues might be more accurate, and from here to the London road and a glass in England's Glory. A peculiar place, but warm and cosy. 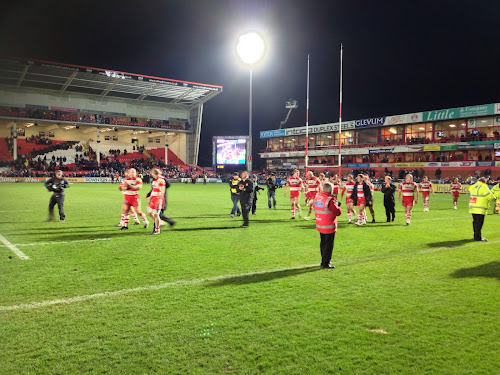 Saturday saw us performing various administrative tasks, including booking flights for various trips and holidays.Portugal in a couple of months for some golf and Majorca for a return trip with the Scottish contingent way off in October (or there abouts). Mrs G and I looked for something for the two of us to do in the mid summer too. I quite fancy a trip to Barcelona if funds permit - but the decision is yet to be made - and the final say is well above my pay grade. We'll see, but it's looking like a definite maybe.

Saturday night was to have been CurlyShirley's birthday do - but Mrs G was feeling a bit rough, and so we decided better of it, rather than share her bug, and stayed in the warm with CurlySue and Son instead.

Sunday saw the first mowing of the year and some serious office tidying. The reinstall action of the wifi printer, which had gotten upset about the new broadband and some more jiggery-pokery on the corporate laptop having upgrade to Lotus Notes 9 - or Notes 9' Social Edition, as its officially called. I have yet to discover the Social elements....

Sunday also found us all "over tired" which I'm sure is down to the movement of the clocks. It's amazing how much that hour effects you. However, Mrs G and I did manage to wander down to Gloucester docks and take in some of the delights of the "Home and Garden festival" with such famous faces as ... Who are these people again?... Charlie Dimmock - oh yes, her off that gardening thing that isn't on anymore - and that Llewelyn-Bowen character, who has to have two names because he has such large shirt cuffs and big hair. I suspect the real reason he's here is because a) they paid him and b)he lives just up the road - oh, and c) it's a bank holiday weekend, so what else was he going to do? 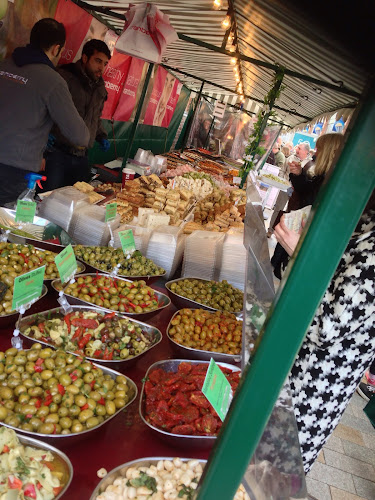 It wasn't much of anything really. A few nice bits and pieces on the stalls and far less crowded than the food festival - which in all honesty is a blessed relief, but other than that, we could have skipped it and not felt the loss. Still, it was a beautiful day for a change and made for an excellent still around the city. 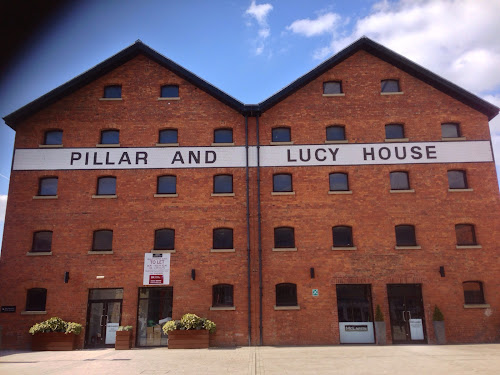 Monday provided a nice long lie-in. Goodness only knows the last time that that happened, but by lunchtime we were all up and about ready to do absolutely nothing if at all possible. Mrs G and I took a trip into Cheltenham to see CurlyShirley having missed her birthday, daughter came over for dinner and we had a houseful for CurlySues cooking - a wonderful chicken in a white wine sauce - which was exceptionally well received.

And so to Tuesday and the end of a most relaxing bank holiday weekend. I was happily able to work from home so not too onerous a start back, but we've rounded the final bend and are into the last leg of the race. This, as we all know, is the toughest part. Cheltenham racecourse is world famous for its last furlong - it has one more than everyone else, and it's uphill. It sorts the men from the boys. There's no denying this is where we find ourselves on this particular job. It's a long uphill struggle - such fun.

What's more, I have a free ticket to see more of the might Glaws playing Biarritz on Thursday with the WTC, but that's now scuppered as it seems I'm needed "up that Laandan", presumably to join in with the moaning, wailing and wringing of hands, or at least help take some of the kicking that will inevitably be dished out.

Ah well - someone's got to take one for the team...